The USDA and Canada’s CFIA are currently reviewing GMO Arctic Golden and Arctic Granny apples, with both expected to be approved for cultivation in 2014. (UPDATE 14/02/2015: The USDA has now approved cultivation) 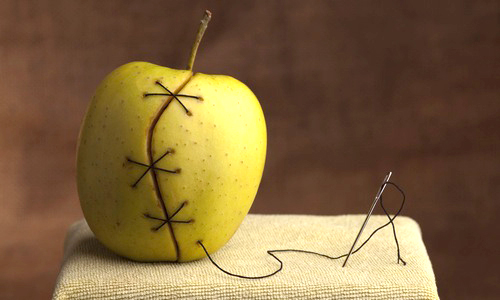 However, a Sustainable Pulse source revealed Saturday that an EU Directive regarding the antibiotic marker gene Kanamycin, found in the GMO Arctic Apples, could threaten not just North American future GMO Arctic Apple exports but the whole of the North American apple export market to the EU. It could also threaten exports to China, Russia, Mexico and Costa Rica due to similar regulations.

Kanamycin (also known as kanamycin A) is an aminoglycoside bacteriocidal antibiotic, available in oral, intravenous, and intramuscular forms, and used to treat a wide variety of infections. The Kanamycin gene, used as a marker in genetic engineering, confers cross resistance against other clinically important Kanamycin-related antibiotics. In the treatment of serious infections, many of the most important other antibiotics damage the cell walls of bacteria in such a way that the toxins inside the bacteria are released into the body, which may be a serious threat in a condition of great weakness. The Kanamycin-related aminoglykoside antibiotics don’t cause such release and are therefore especially valuable in severe life-threatening infections. It would be an important drawback if the resistance to these antibiotics would increase.

The use of Kanamycin as the marker gene in GMO Arctic Apples means that EU regulators may refuse to allow imports of not just GM Apples from North America but also all North American apples over cross-pollination and gene transfer fears.

In the EU directive below it is clearly stated that by 31 December 2008 all GM crops which contain antibiotic marker genes were phased out due to adverse effects on human health and the environment.

Article 4 of the directive states:

Member States and the Commission shall ensure that GMOs which contain genes expressing resistance to antibiotics in use for medical or veterinary treatment are taken into particular consideration when carrying out an environmental risk assessment, with a view to identifying and phasing out antibiotic resistance markers (antibiotic markers) in GMOs which may have adverse effects on human health and the environment. This phasing out shall take place by the 31 December 2004 in the case of GMOs placed on the market according to part C and by 31 December 2008 in the case of GMOs authorised under part B.

Okanagan Specialty Fruits has petitioned for regulatory approval for the two GMO apple varieties in Canada from the Canadian Food Inspection Agency (CFIA) and Health Canada and in the US from the Animal and Plant Health Inspection Service (APHIS), part of the United States Department of Agriculture (USDA). If approved, as seems likely, they would be the first genetically engineered apple brought to market in North America.

The possible approval has not just worried GMO Free campaigners but also a number of fruit farming organisations in North America. The British Columbia Fruit Growers Association has even openly rejected the GMO Arctic Apple because of the lack of independent testing or public consultation, the uncertainty over cross-pollination with non-GMO apple trees and the probable rejection of B.C. apples by export markets.

This new revelation regarding the antibiotic marker gene in GMO apples could also lead to understandable fears amongst US and Canadian consumers, who are already deeply worried about antibiotic resistance issues.

Another Blow to the Already Struggling EU-US Apple Relations

The new Kanamycin antibiotic gene scandal is set to further harm the already struggling apple relations between the US and Europe.

US pear and apple exports to Europe are in steep decline, dropping 73 percent over the past five years. That’s a loss of $33 million a year in export revenue, according to a bipartisan group of nine US senators.

“The erosion of the European market for U.S. apple and pear exports is largely the result of different regulatory standards and requirements for pesticides and food additives,” the senators wrote in recent letter.

In the last six years, apple exports from the Northwest USA have declined from more than 1.35 million to around 500,000 boxes, a drop of 60 %, said Dr. Michael Willett, vice president for scientific affairs for the Northwest Horticultural Council. “The East Coast ships about a half million cartons of apples to the United Kingdom, and they, too, have lost ­substantial market due to a wax issue.”

When the European Union harmonized regulations governing plant protection chemicals in 2008, the harmonization made it easier for EU countries to ship to each other, Willett explained. But the new requirements also included more stringent maximum residue limits, or MRLs, that apply to imported products. MRLs for a chemical used in common fruit waxes and two chemicals used to prevent scald in apples and pears have been causing problems for U.S. fruit exporters.