The African Centre for Biosafety (ACB) has submitted an objection to an application by Dow Agro-sciences to conduct a field trial of a “stacked” GM maize event called MON89034xTC1507xMON NK603. The submission was endorsed by the Southern Cape Land Committee, an NGO based in George working toward agrarian reform. One of the proposed field trials will be run in George, located on the prestigious tourist destination, the Garden Route. Concerned residents of George held a protest and submitted a petition against the trials, supported by close to 1000 people, to South African authorities. 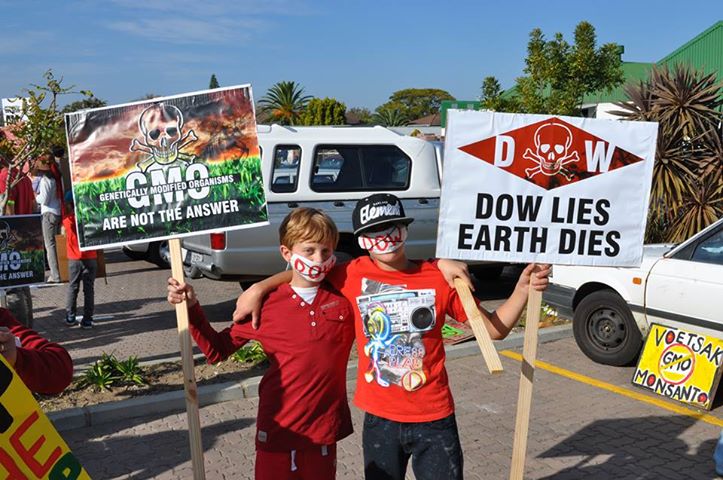 Stacked varieties combine several different traits into one crop and are controversial because of their complexity and potential for unknown risks. These varieties are being developed to try and deal with the failures of GM crops currently on the market, which have resulted in weeds and insects that are resistant to the technology. The maize is resistant to a number of pests and has also been engineered to withstand applications of two different herbicide sprays – glyphosate and glufosinate.

Independent assessment of Dow’s safety dossier was difficult as much of the information was deleted on the grounds that it is ‘confidential business information’. The information that was provided proved to be woefully inadequate and was based on the scientifically discredited notion that GMOs are “substantially equivalent” to their non-GMO counterparts. The safety dossier also made broad claims of environmental and socio-economic ‘benefits’ without reference to any peer-reviewed studies. No details of feeding studies were supplied, nor was there any information on the safety of the two chemicals that the crop is designed to withstand.

The ACB cited numerous peer reviewed studies that contradicted Dow’s claims of safety. Dow’s application failed to adequately show that MON89034 x 1507 x NK603 is safe for human, animal and environmental health, and should therefore be rejected by the Executive Council. The EC has already given approval for commodity imports of this maize, which will be used in food and feed. It is our recommendation that this decision be revised.

The protests in George follow hot on the heals of the nationwide and global protests against Monsanto on the 25th of May, and consumer fury over high levels of GM maize in our staple and baby foods. It is clear that as more and more South Africans become aware of the scientific and social pitfalls of GM crops, they will continue to demand non-GM alternatives from our food companies and our government.