We are thrilled to tell you that a short while ago, the Senate amended and voted on HB 6527, the GMO labeling bill voted on by the House last Thursday.   After several days of intense negotiation between the Senate, the House, and the Governor’s office, a compromise was reached this afternoon.  All four leaders of the House and Senate, Senator Williams, Senator McKinney, Representative Sharkey, and Representative Cafero, are all sponsors of the amended bill. 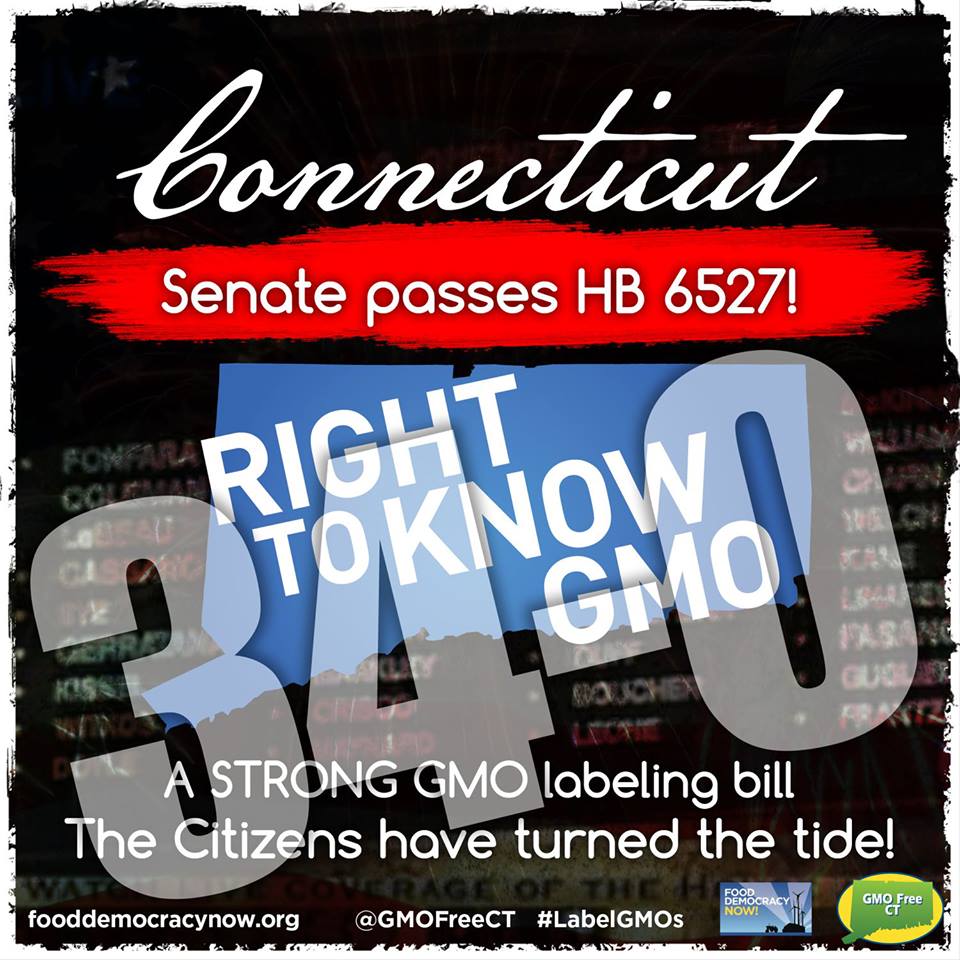 Today’s GMO labeling agreement is historic and we are proud to have played a role in its development.  YOU should all be proud.  Connecticut will now set the standard for states around the country to follow.  We are grateful to all who worked to make this possible.  Thank you to all our champions in the House and the Senate.

Derek Slap, a former TV reporter who is the Senate Democrats’ chief of staff, said the effective use of social-media by GMO Free CT was reminescent of how gun-control advocates kept up pressure on legislators earlier in the session. “I think it’s a relatively new phenomenon,” Slap said. “You can organize relatively large numbers of people very quickly and impact public policy.”

The amended version of the bill is without the exemption for farmers grossing less than 1.5 million dollars, which undermined the entire intent of the bill.  However, there is a more reasonable trigger clause included.  The bill will go into effect when “Four states, not including this state, enact a mandatory labeling law for genetically-engineered foods that is consistent with the provisions of this subsection, provided one such state borders Connecticut; and (2) the aggregate population of such states located in the northeast region of the United States that have enacted a mandatory labeling law for genetically-engineered foods that is consistent with this subsection exceed twenty million based on 2010 census figures.” While we believe we have a right to know what is in our food today, we are satisfied that the language of the GMO labeling bill will give CT consumers transparency in labeling that will allow them to make informed decisions once the law is triggered.

“The day the Senate passed the first bill, over a million Facebook hits,” said James Leahy, a former grass-roots organizer who is their Connecticut lobbyist. “I think the depth of their grass roots is unprecedented in my experience.”

We just took on the most powerful industry on the globe and the power of the people triumphed. Congratulations to each and every one you.  The House will be voting on the bill after the weekend.

With Gratitude and Excitement,

Tara and The Team at GMO Free CT