Paul Deheuvels is an eminent statistician and a member of the French Academy of Sciences. Yet he was not consulted when the Academy released a statement discrediting the results of the study on GMOs, led by Gilles-Eric Séralini. Revolted by these methods, Paul Deheuvels goes back over this matter where pressures and conflicts of interest got the upper hand. 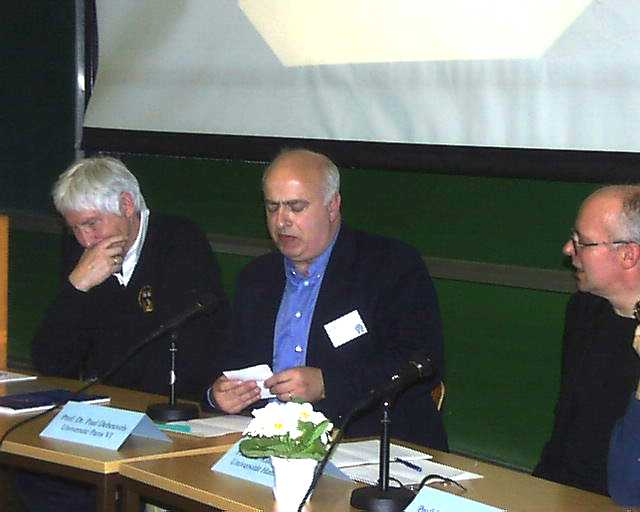 Remember, it was in September 2012 that the news exploded like a bomb: for the first time an independent study exposed the dangers linked to the ingestion of a GM plant. The experiment(1) had studied the effects of the GM maize NK 603 on a population of 200 rats for 2 years. The animals fed with GMOs died earlier and developed more tumours than those in the control group. The press reported these results until voices started to contest the study. First a non-editorial comment article from 40 researchers denounced the results, labelling the study a “media stunt”, and then it was the turn of the Academies. Without any internal consultation, the French Academy of Sciences, and then the five other major Academies released a statement that vilified Gilles-Eric Séralini’s work, protesting especially about the statistical aspect of the results.

To the informed observer, it was obvious that lobbies were taking control in order to change public opinion. Paul Deheuvels, from the French Academy of Sciences, Director of the Laboratory of Theoretical and Applied Statistics at the University of Paris VI, had not been consulted when this statement was written. Shocked by this procedure, unworthy of an Academy, he recalls the event.

[Rebelle-Sante:] How did you find out about the French Academy of Sciences’ position on this matter?

[Deheuvels:] In November 2011, during an award ceremony at the Academy, I exchanged a few words with one of my colleagues at the Institute, Professor Alain-Jacques Valleron, a biostatistician, for whom I have huge respect.

He made me aware that the Academy was preparing a statement on Gilles-Eric Séralini’s article. As I am currently the only member of the French Academy of Sciences 100% specialised in statistics, I was astonished not to have been consulted to judge this research, which has an important statistical content. Alain-Jacques Valleron told me that he found this study absolutely worthless. According to him, it had no value; it did not demonstrate anything and deserved to be exposed to public contempt. In return, I gave him a completely different opinion with solid arguments that I tried to get across.

During this discussion, I accidently found out that Professor Jean-François Bach, president of the Academy, intended to make public a very critical opinion of the same study. Finding it strange I asked to be in contact with Bach. The next day, he contacted me by telephone and told me that he thought that Professor Séralini’s work should be categorically rejected. Unsurprisingly, I exposed my arguments leading to a position opposing his. During this discussion, Professor Bach kindly tempered his statements, telling me that, in the main, he and I should be able to reach a consensus. I told him that if we were able to find common ground, my reservations should be at the very least added to any communication that the Academy would be willing to make about this question, in order for the debate to remain balanced. He replied: “Too late, the shot has been fired.”

[Rebelle-Sante:] What was your reaction?

[Deheuvels:] I found it absolutely scandalous. I was very angry, and, without delay, I made a statement to the press saying that I thought it abnormal that the Academy would make comments decrying a study of this magnitude without a minimum of relection, taking time and assurances.

There is even more. Professor Bach told me, that within a few days, he selected two members from the French Academy of Sciences (Valleron and himself, unless I am mistaken), and, in addition, two members from each of the five Academies (agriculture, medicine, pharmacy, technology and veterinary). He put together, extremely quickly, a committee for the occasion that met briefly to draft a press release on Séralini’s study. I thought it was even more outrageous to do so because it was truly an arbitrary act of state. It is easy to manipulate an election by choosing voters.

[Deheuvels:] I studied Professor Séralini’s article in great detail. He speaks of toxicology from an experiment on rats of the strain Sprague-Dawley. He has been criticized, for example, for using this strain of rats that is said to be susceptible to develop tumors. However, it happens that the same strain of rats is used by absolutely everyone, including, moreover, industries that want to demonstrate the safety of their processes. So here is an example of criticism, which is absolutely ridiculous.

Professor Bach voiced another criticism of this study in my presence. He told me: “It is not right that Gilles-Éric Seralini has used young rats. He should have started his investigation with adult rats’’. I told him that if we had started the research with 6 months old rats, most of them would have died before the end, given their average life expectancy of two years. It would therefore be pointless to carry out a study of this length. Here is another example of rash judgement, with no solid foundation, aiming to destroy this piece of work.

There are several types of statistical analysis. Gilles-Eric Séralini’s study is not a certification study seeking to demonstrate that certain substances are harmful, but rather a piece of exploratory research to guide future investigations. Initially, Séralini did not know what he would find, so he designed his experiment, reproducing almost exactly the protocol already used to put NK603 maize on the market, while increasing its duration, and multiplying the analysis of different biomarkers. He obtained a large set of digital data that enabled him to present a number of findings. Statistical methods aiming to demonstrate hypotheses (such as the harm, or the reverse, the safety of a product) are called tests. And tests are only a drop in the ocean of statistical methods. Very often there is no universal method allowing us to design tests on large arrays of complex data (such as those based on the observation of functions). We can do it for a limited number of numerical observations, but we do not know how to achieve the operation when the numerical results available are numerous (as, for example, in Séralini’s investigation, where more than 50 biomarkers were measured for each animal at different moments of the study).

In such a context, it is natural to seek to describe first the phenomena observed without aiming to demonstrate the existence of particular effects using hypothesis tests. Many articles in statistics are limited to the description of a phenomenon where the statistician says: “I see the effects,” without providing a demonstration that these effects can be reproduced. Criticizing Gilles-Eric Séralini because he sometimes says “I see that…”, and he does not demonstrate, is witch hunting. The purpose of exploratory research is to introduce legitimate suspicions, the confirmation of which can only be achieved by further certification studies that can only come afterwards. It is outrageous to forcefully require proof of these effects, particularly from the outset, and establish this once and for all. It does not comply with professional ethics, and this is not what usually happens.

[Rebelle-Sante:] Recently you received the raw data from Gilles-Eric Séralini’s study, do they confirm the validity of the study?

[Deheuvels:] In the first place, I got a count of the animals with and without tumours. The basic analysis of these tables shows that the differences between groups are statistically significant. Thus, it is not possible to conclude that the two groups of 10 rats are homogenous, when the first has 2 animals with tumors, and the second, for example 8. It is obvious that these tables show statistically significant differences. It is only recently that I received more complete data, which I have committed to keep confidential. Nevertheless, I can confirm the existence of statistically significant differences in observation data other than counts. It seems to me that if they were not identified by the agencies, which may have processed this data, it is seemingly due to the use of insufficiently sensitive methods. It is easy not to see anything through an optical instrument, the focus of which one has not sought to adjust.

[Rebelle-Sante:] What do you think about the Academy’s probity?

[Deheuvels:] This case shows the pressures that are applied to manipulate the Academy, and to transform it into a lobbying tool. For me, the Academy must remain a forum where divergent views can be freely expressed and coexist. Seeking to find a consensus on everything is not scientific. The truth cannot be decided by a vote, and trying to manipulate it by dishonest processes is unhealthy. Financial interests associated with certain issues are always likely to distort the debate. It is no longer the science that speaks, but the wallet! Everyone should have to clearly specify the source of funding of their research before claiming to speak for or against some studies. In some cases, conflicts of interest are so obvious that they leave you speechless!

(1)  The study was supported by the Committee for Independent Research and Information on Genetic Engineering www.criigen.org. CRIIGEN has filed several libel suits against scientific criticisms made ​​against this study.

Despite strong pressure and doubts about Prof Séralini’s integrity, mental health and personal interests that the media helped to spread, his study on the toxicity of GMOs and Roundup was one of the most viewed in the world since its publication last September, and the editor of the toxicology review, which published it, has published today detailed answers to all criticisms of the study.

Yes, well done Mr. Séralini, for your courage in the face of adversity, your integrity, your desire to protect your fellow citizens against poisons they try to force us to swallow!

Criticism came from some forty scientists and agencies or associations: the majority have conflicts of interest with Monsanto and others and are not specialists on GMOs or toxicology.

On 11 January, in its press conference, Criigen (Committee for Independent Research and Information on Genetic Engineering, which originated the study) announced that it has received the support of more than 300 scientists from 33 countries and 5 continents.

This study revealed the assessments’ weaknesses and its publication should trigger long-term tests if we are to believe the reactions of ANSES (Agence nationale de sécurité sanitaire de l’alimentation, de l’environnement et du travail = National Agency for Food Safety, environment and labour); this is a great victory.

Criigen has also filed several libel suits against the assertions of “fraud” and “falsified data” published respectively in Marianne and La Provence by Jean-Claude Jaillette and Claude Allègre.

Scientific criticism in such bad faith, struggles to prevail in the long term and the truth eventually comes out…

“In 2013 we will take other appropriate legal action in order to make completely transparent the hidden and lax toxicological data, which has allowed [industry], through health agencies, to obtain marketing authorisation for the products we tested, amongst others. To lead by example, we place our raw data, very solemnly, in the hands of a legal investigator. We will make these public with the consent of governments and as soon as Monsanto or agencies will have done the same for their own data. This will allow the scientific community to access all existing toxicological data on these industrial products, in order to have a truly balanced and transparent expertise, and not a pseudo-expertise biased by pressure groups more concerned with their interests than public health.”