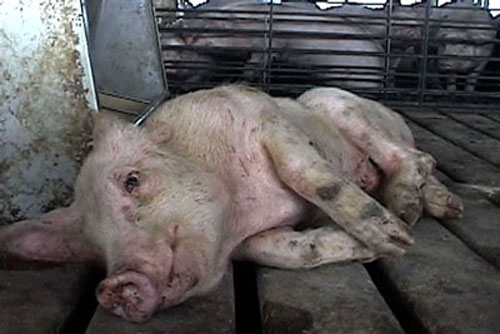 Their research indicates that 3% of organic pigs in the Netherlands are carrying livestock-associated MRSA, compared with 38% of non-organic pigs. This type of MRSA was first found in 2003 and is of particular concern because it can spread to humans causing serious infections.

Emma Slawinski from Compassion in World Farming speaks on behalf of the Alliance to Save Our Antibiotics, saying: “The Dutch research shows that by raising pigs in higher-welfare conditions with bedding such as straw and outdoor access the levels of antibiotic use and of MRSA can be greatly reduced. This benefits human health too, as livestock-associated MRSA has already caused human deaths in Europe.

“British pig farmers need to remain vigilant to ensure that MRSA does not become established in the British pig herd.”

The Alliance to Save Our Antibiotics urges the pig industry and the Government to do more to ensure that MRSA never becomes a problem in British pigs. It would like the following to take place:

The Government to undertake routine surveillance for livestock-associated MRSA in British pigs to ensure that any development can be identified and addressed at an early stage.

The researchers collected nasal samples from 60 pigs and five dust samples from the buildings on each of 24 organic pig farms. Pig farmers, their workers and families were also tested for MRSA. The results were then compared with earlier research which had used the same methods to examine non-organic pig farms.

Government scientists have never tested British pigs for MRSA. Testing of five dust samples from each of 258 British pig farms found no evidence of MRSA, but this appears to be a relatively unreliable method. [3] Only one of 120 dust samples (0.8%) tested by the Dutch scientists contained MRSA compared to 3.3% of the samples from the pigs themselves.

For further information, images or to arrange interviews contact: