Categorized as
2481
Tagged as
glyphosateLowe'sRoundup
Related

On the day of its annual shareholder meeting, Lowe’s is under renewed pressure to stop selling cancer-linked, pollinator-toxic weedkiller glyphosate, the key ingredient in Roundup, as a coalition of consumer and environmental groups installed a giant billboard outside of company headquarters. 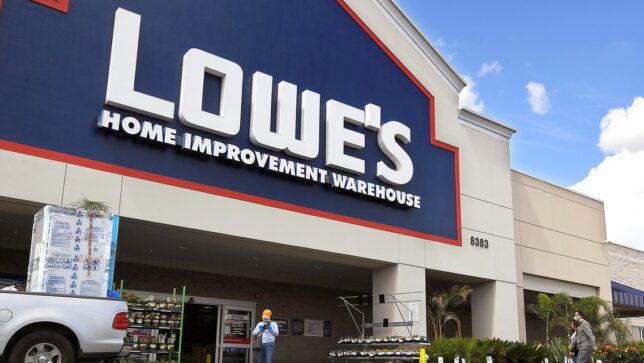 The billboard  features a video detailing the dangers of glyphosate to Lowe’s customers and endangered species, including bees and other pollinators, and demanding that the home and garden giant immediately remove Roundup and other products containing glyphosate from its shelves. Bayer announced plans to remove cancer-linked glyphosate from weedkiller Roundup by 2023 for the U.S. consumer market, following a series of large class action lawsuits by cancer patients who claim the weedkiller caused their illness.

As the second-largest home and garden retailer in the U.S., Lowe’s can play a huge role in ending the use of this toxic weedkiller in our backyards and across the country. A recent analysis released by coalition member groups shows that half of herbicides sold by Lowe’s contain highly hazardous ingredients. Friends of the Earth and allies are campaigning for Lowe’s and Home Depot to immediately end sales of Roundup and other glyphosate-based weedkillers based on science linking the chemical to cancer and other serious health concerns, as well as threats to pollinators and endangered species.

Urging that the health of people and pollinators can’t wait, the groups contend that unless major home and garden retailers act now, consumers and threatened species will continue to use and be exposed to glyphosate via Roundup for the next year. The coalition, backed by 124 other organizations, is demanding that Lowe’s build on its earlier commitments to phase out bee-killing neonicotinoid pesticides and it’s broader chemical policy by taking decisive action on glyphosate and shifting to safer alternatives.

This week, Friends of the Earth led a national week of action along with SumOfUs, Beyond Pesticides, Center for Food Safety, Green America, Herbicide Free Campus, Toxic Free NC, and Kids Right to Know. Thousands of people have taken to social media, called and sent emails to Lowe’s executives. Individual shareholders have also submitted questions to company leaders.

“It’s reckless for Lowe’s to keep selling glyphosate when safer organic alternatives exist,” said Paolo Mutia, Food and Agriculture Campaigner at Friends of the Earth. “Lowe’s must build on earlier commitments to phase out bee-toxic neonic pesticides and its chemical policy by immediately removing glyphosate products and ensuring alternatives are truly safer.”

“Lowe’s claims to value its customers, but company executives are putting their customers’ health at risk by refusing to take this toxic weedkiller off its shelves,” said Lacey Kohlmoos, US Campaign Manager at SumOfUs. “We hope that hearing directly from concerned customers and shareholders will convince Marvin Ellison and the other Lowe’s executives to value health and safety over profit margins, and finally get rid of Roundup and other glyphosate products linked to cancer.”

“Consumers are increasingly looking for green, non-toxic practices as they move to more organic gardening and lawn care,” said Emma Kriss, Food Campaigns Manager at Green America. “Lowe’s should move away from selling Roundup and other harmful products, offering products that are safer for people and the planet.”

“Now is the time to phase out these toxic chemicals. We are facing code-red biodiversity and climate crises and it is shameful that Lowe’s and Home Depot continue to prioritize profit over people and the planet,” said Sheina Crystal, Director of Communications and Campaigns at Herbicide-Free Campus. “Viable alternatives to glyphosate-based products exist. How many more people must get cancer from Roundup before these giant corporations take action to protect their customers?”

“It’s time for Lowe’s to demonstrate bold leadership that prioritizes environmental stewardship and human health over short-term profits from continued sales of toxic weedkillers like Roundup,” said Rebecca Spector, West Coast Director of Center for Food Safety. “Lowe’s customers shouldn’t have to wait for Bayer/Monsanto to stop producing a product that’s been found to cause cancer. Lowe’s could and should make a commitment to phase out Roundup today.”

Beyond Pesticides’ Science and Regulatory Manager Akayla Bracey explains, “Dependency on toxic pesticides like the glyphosate-based products sold at Lowe’s contributes to the existential crises of human pesticide-induced or exacerbated illness, biodiversity collapse, and the climate emergency and calls for urgent action to eliminate their use. It is beyond time for Lowe’s to take these dangerous products off their shelves.”

Glyphosate is the most widely used pesticide in the world. It is a probable human carcinogen and has been linked to kidney disease, shortened pregnancy, endocrine disruption, DNA damage, decreased sperm function, disruption of the gut microbiome, and fatty liver disease.

The EPA found that glyphosate can injure or kill 93% of U.S. endangered species. It is a primary driver of monarch butterfly population declines and has been linked to bee declines, disrupting bee gut microbiomes, affecting larval development, increasing colony vulnerability to pathogen infestation, and impairing navigation.

Since 2020, the coalition has delivered over 200,000 petition signatures to the company; sent thousands of emails and letters to corporate executives; generated thousands of tweets and Facebook posts targeting the company; taken out an ad in the Charlotte Observer; and released this video of Lowe’s customers demanding action on social media.