As President Biden continues to promise that his administration will address the climate crisis and protect the air we breathe from industrial polluters, 24 advocacy organizations are demanding his Environmental Protection Agency live up to that promise by doing more to protect communities from factory farms. 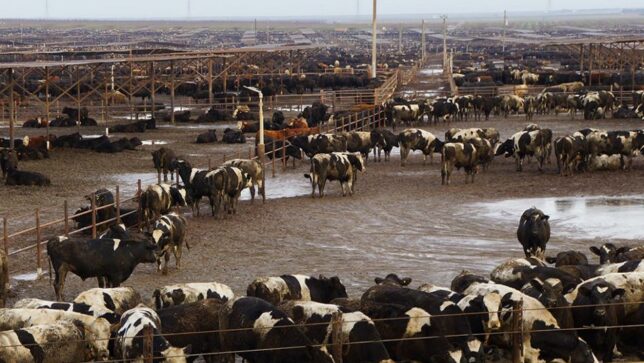 The groups filed a legal petition with the EPA at the end of October urging it to enforce federal air pollution laws against these major polluters, something the agency has refused to do for nearly two decades.

Over 16 years ago, the George W. Bush administration announced an agreement and final order it had secretly negotiated with the National Pork Producers Council. The EPA agreed to refrain from enforcing key air-pollution control and public-disclosure laws like the Clean Air Act against any animal feeding operation that signed up for the deal.

In exchange, participating feeding operations agreed to pay a small penalty to fund a nationwide air-monitoring program that was supposed to help the EPA develop more accurate air emissions estimating methodologies. The methodologies were intended to allow the EPA and citizens to calculate factory farms’ pollution and begin enforcing clean air laws.

Nearly 14,000 animal feeding operations signed up for this deal, known as the Air Consent Agreement, which, by its own terms, should have been completed in 2010. Yet, due in part to the fundamentally flawed ways in which the EPA designed, ran and used the data collected from the air monitoring study, the agency has yet to finalize any methodologies or end the consent agreement.

As a result of the EPA’s protracted delay, thousands of the nation’s largest animal feeding operations continue to enjoy protection from EPA enforcement actions, even if their air pollution emissions exceed legal limits or reporting thresholds.

The feeding operations emit a number of deadly air pollutants like ammonia, hydrogen sulfide, particulate matter, volatile organic compounds and climate-altering methane. According to a recent study, the livestock industry’s air pollution is responsible for more than 12,700 deaths per year — more deaths than are attributed to coal-fired power plants.

In light of the serious and unregulated public health impacts of air pollution from the feeding operations, the advocacy groups are demanding that the EPA put a stop to its “unacceptable dereliction of duty” by terminating the Air Consent Agreement and taking all actions consistent with Biden’s executive orders to enforce applicable clean air laws against the feeding operations.

“AFO air pollution not only harms human health and our environment, it also exacerbates the suffering faced by the animals living at these facilities,” said Stephen Wells, executive director of the Animal Legal Defense Fund. “This free pass to pollute the air is another way our federal government subsidizes this cruel industry and helps it to thrive and expand.”

“Air pollution from factory farms kills almost 13,000 people a year, yet the EPA continues to sit on its keister as the meat industry emits more and more air pollution without consequences,” said Hannah Connor, an attorney at the Center for Biological Diversity. “The agency’s practice of ignoring these dangerous emissions for 16 years now makes it an accomplice in likely more than 200,000 deaths and countless harms to the environment and wildlife. Enough is enough.”

“Communities surrounding the mega-dairies in Oregon have suffered long enough from their air pollution,” said Amy van Saun, senior attorney at the Center for Food Safety’s Pacific Northwest office. “No one wants to live near these stinking and hazardous operations, yet EPA continues to sacrifice the most marginalized people to the benefit of industry profit.”

“We are simply asking the EPA to level the playing field and treat this industry the same way it treats every other industry,” said Abel Russ, senior attorney at the Environmental Integrity Project. “We strongly support the agency’s efforts to update the science, but that process is always ongoing — it should never be used as an excuse to put critical environmental protections on hold. No other industry gets that kind of special treatment. It’s unfair, and it has important consequences to overburdened communities across the country.”

“The EPA has given factory farms a free pass to pollute since 2005, when it negotiated a backroom amnesty deal with the industry essentially exempting it from federal air pollution laws,” said Emily Miller, staff attorney at Food & Water Watch. “Since then, factory farms have been freely spewing dangerous air contaminants into the environment, not only threatening the health of nearby communities, but also contributing to climate change. This needs to stop.”

“For decades, the factory farm industry has insulated itself from the necessary enforcement critical to a just food system and healthy climate,” said Brent Newell, senior attorney at the Public Justice Food Project. “The Air Consent Agreement, now more than 16 years old, has given factory farms a free pass to pollute and reflects past administrations’ failure to take urgent action and prioritize human health over the profit-driven interests of Big Ag. We urge the EPA to grant this petition and to finally abandon an agreement that not only undermines the law, but also entrenches the factory farm system in a way that harms Black, Latino, Indigenous, Asian and white rural communities.”