Guilty! Many of us in the regenerative agriculture movement describe the world’s soils as a “sink” into which excess atmospheric carbon can be stored, and we’ve been wrong. That mistake has diminished the appeal of our concepts and, in some circles, made us seem irrelevant. We need new terminology before our movement suffers death by a word. 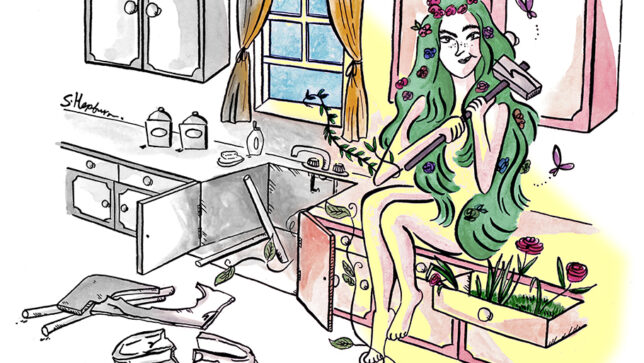 Source: Center for Regenerative Agriculture and Resilient Systems (CRARS) at California State University, Chico; by Tom Newmark, Chairman of The Carbon Underground, and member of the CRARS Leadership Council

Our intentions were good, but let’s review the birth and transmission of the sink meme. Humans, through the burning of fossil fuels and agricultural malpractice, have transferred a trillion tons of CO2 into the atmosphere (itself a carbon sink), creating climate chaos and threatening life as we know it. Those trillion tons can’t go into other commonly described carbon sinks such as the oceans or fossil fuel deposits, so we have to somehow put the CO2 into the only other available carbon sinks, namely, above-ground biomass (as with reforestation) or back into the soil. And sure, we have to dramatically reduce and ultimately eliminate new fossil fuel emissions, but while we’re decarbonizing the economy we must, according to our story, fill those other carbon sinks. The term “sink” stuck. And now it’s sinking the opportunity….

I know this because of a dinner conversation I had not long ago at my regenerative farm in Costa Rica, Finca Luna Nueva. A group of brilliant and generous environmental activists and funders gathered to ponder the best responses to the climate crisis. In talking about soil carbon, one of those activists basically wrote off soil carbon as having no meaningful role in the climate response because, to paraphrase, the “sink can only take in so much carbon. Once it’s filled–once its physical limit is reached–it no longer has a role in the climate strategy.”

Our ensuing dinner debate was about the size of the sink–was it big enough (a huge bathtub!) to hold tens of billions of tons of carbon or was it, as the skeptic contended, only big enough to hold 1-3% of the legacy CO2 now poisoning our atmosphere? I tried my best to illustrate that the carbon sink was big enough to maybe even store all legacy CO2, but I slipped in the tub. I couldn’t get past the meme of soil as a physical container. The language we’ve all used to describe the soil limited my colleague’s imagination, and now it’s time to bury that meme.

Soil is not a sink. Or a bathtub. Carbon flowing through the soil-food web doesn’t go “into” a tank, and we’ve got to stop talking like it does. What soil is, instead, is living tissue that grows or contracts depending on how it is nourished or exercised. After all, when carbon flows into the tissue of the soil, it doesn’t compact the soil as it would if the carbon was filling up the empty spaces in a tank. Carbon-rich soil is more porous, creating what is called the soil water battery, the spongelike tilth of healthy soil that actually increases in volume as soil organic matter increases.

Some of us like to think about the planet in mythological terms, such as where Mother Earth or Gaia works to create conditions supportive of conscious life. I find that a helpful metaphor, so let’s run with that. When we farm regeneratively, plants photosynthetically capture solar energy and with simple building blocks (H2O and CO2) create what Dr. Christine Jones elegantly describes as liquid carbon. That liquid carbon satisfies the plant’s metabolic requirements and some also flows through the roots out into the soil food web. The swapping of liquid carbon (plant sugars) for other nutrients creates an underground commodities exchange, and at every moment there is a flow of carbon into that exchange as complex carbon molecules are being formed and integrated into the tissue of the soil. There’s also an outward flow, as decomposition/respiration/catabolism occur. Under the right circumstances, the accumulation (anabolism) outpaces the respiration (catabolism), and net positive amounts of carbon work their way into the living tissue of Mother Earth. In a healthy ecosystem where more carbon is “drawn down,” the flux of carbon into the soil is positive.

So it’s not at all like Mother Earth has a sink strapped around her waist that is filled with carbon, which once filled is the end of that. Mother Earth is an athlete still in her prime building muscle, not a plumbing supply company lugging around an inert and limited carbon sink.

How do we know this? Well, it’s what our eyes tell us every day. If carbon flowed into and simply filled a sink, we would see healthy soils becoming more compacted. We would see liquid carbon pouring in and filling up the spaces in the sink until, as my dinner colleague insisted, the sink could hold no more. But we don’t see that. Instead we see highly compacted dirt becoming porous tilth. We see rain-resistant brick-like dirt turning into a water-welcoming sponge. We see microorganisms and larger creatures in the soil food web multiplying and expanding, creating networks, tunnels, airways, and pathways. We see roots and mycorrhiza push out to create microscopic niches and crevasses into which necromass (the debris of dead organisms) somehow flows. We see soil being built up–not filled in. We see the healthy and productive zones of soil growing both up and down! This is not how a sink works. What we observe with regenerative agriculture is living tissue expanding, increasing in volume, and becoming more porous and nutrient rich.

And we also know this because the biophysical history of our planet demonstrates that soil is living tissue. Consider the Ordovician Period, about 480 million years ago. The planet was basically the great rocky supercontinent Gondwanaland surrounded by a hot ocean. That continent had no end of rock and clay, but it had no soil. None. Atmospheric CO2 hovered at around 4,000 ppm, and this barren scene hardly hinted at the Garden of Eden that would soon arise.

Terrestrial plants and their microbial allies then happened, and atmospheric CO2 ppm plummeted from around 4,000 to somewhere around 250-270. This did not happen because massive amounts of CO2 went into a soil carbon sink. There wasn’t any soil and there wasn’t any sink. Rather, a revolution of life forms created new living tissue that feasted on and integrated the bundled solar energy flowing through the liquid carbon pathway.

And we saw this in England, where in places the rich topsoil, until quite recently, used to go down three meters. Or in the Great Plains, where the ballet of bison and tall grasses created rippling living tissue that sometimes was many meters deep.

These did not happen because some “sink” in the Great Plains or Great Britain was filled in. They happened because life itself created the greatness.

My dear friend and engineering wizard Russ Conser, now the CEO of Blue Nest Beef, has contributed to my thinking on this, and I asked him to reflect on the sink saga. Here’s how he reacted, and I think it’s a perfect framing of the issue:

“We know that the top 2 meters of soil hold roughly 2.5 times the carbon as the entire atmosphere (2.06 GtC). By comparison, the average annual increase in atmospheric CO2 is < 0.1% of these soil carbon stocks (1.6 GtC/y). So small changes in soil carbon stocks can add up to big changes in the Earth’s atmosphere. Once you understand that the process of storing soil carbon doesn’t just fill a bathtub, it actually and necessarily grows new soil like healthy living tissue, you realize we don’t have to grow it very much to store quite a lot. Although assumptions can lead to widely different results, every time I’ve done some back of the envelope math, hypothetically speaking, we could run out of carbon in the air before we run out of places to put it in soil. So although the science is still highly uncertain, for now, my view is that we should store as much as we can as fast as we can. If we start running into limits somewhere down the road, that will be a good problem to worry about then, and we’ll have no regrets about the other benefits we’ve realized in the meantime.”

So regenerators, let’s work with Mother Earth, helping her muscle up to meet the challenges ahead.