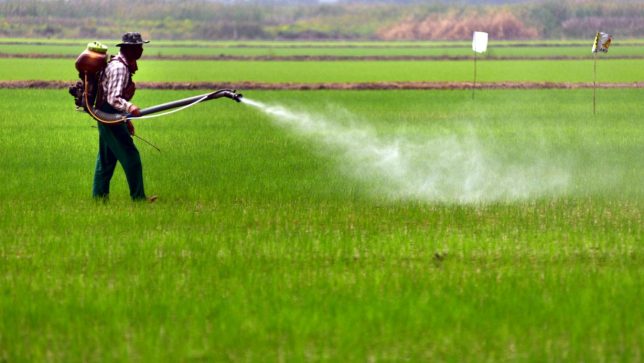 The Award—often referred to as the ‘Oscar on Best Polices’—celebrates the most effective policy solutions that minimise the adverse effects of exposure to chemicals on human health and the environment. Sri Lanka’s inspiring and impactful pesticides policies are one of the five winners selected by the World Future Council among 55 nominated policies from 36 countries.

Sri Lanka had one of the world’s highest suicide rates, and pesticide poisoning accounted for more than two-thirds of all cases. Sri Lanka’s Control of Pesticides Act No. 33 of 1980 and amendments of 1994, 2011 and 2020 ensures that only less hazardous pesticides are available. It has been used to ban a total of 36 HHPs (highly hazardous pesticides). These pesticide regulations, as well as Sri Lanka‘s National Policy and Action Plan on Prevention of Suicide of 1997, have contributed to one of the greatest decreases in suicide rates ever achieved globally.

The country’s suicide rate has been reduced by 70 percent, particularly in rural villages and among children and youth. The ban will save about 93,000 lives over 20 years at a direct government cost of less than USD 50 per life, according to the World Future Council. The Council also pointed out that Sri Lanka has maintained its agricultural productivity, and recommended the banning of HHPs as one of the most cost-effective approaches for suicide prevention.

“We congratulate the policymakers and the people of Sri Lanka for this award. We hope that it inspires policymakers in other countries in the Asia Pacific region that grapple with pesticides poisoning, and suicides, to take decisive action to ban Highly Hazardous PesticidesHHPs. The Sri Lanka experience debunks the myth that pesticide bans lead to decreased productivity. The reality is that such bans save thes lives of many farmers that are otherwise needlessly lost, while reaping benefits for human health, ecosystems, and agriculture and the economy,” said Dr. Meriel Watts, PANAP director of Science and Policy.

PANAP also commended the Sri Lankan government for standing by a ban on the import of chemical fertilizer, pesticides and weedicides declared under the Imports and Exports (Control) Act No. 1 of 1969, which was announced by President Gotabaya Rajapaksa last May.

“The Sri Lankan ban on imported chemical fertilizers and pesticides can protect people, especially children, from the most harmful effects of agrochemicals. In fact, many of these products are banned for use in developed countries but still exported to the Global South by the world’s largest agrochemical companies. The ban is a laudable assertion of sovereignty that opens up an exciting array of possibilities, especially if the government extends full support for the transition to agroecological approaches in farming,” Watts further said.