The toxic pesticide chlordecone was used on banana plantations in the French West Indies until 1993 but continued to pollute the waters surrounding the islands long afterwards. This pollution puzzled researchers, who expected the hydrophobic chemical to adhere to contaminated soil and not enter the watershed. A new study finds that use of the herbicide glyphosate, which began in 1997, caused the chlordecone release by accelerating soil erosion. 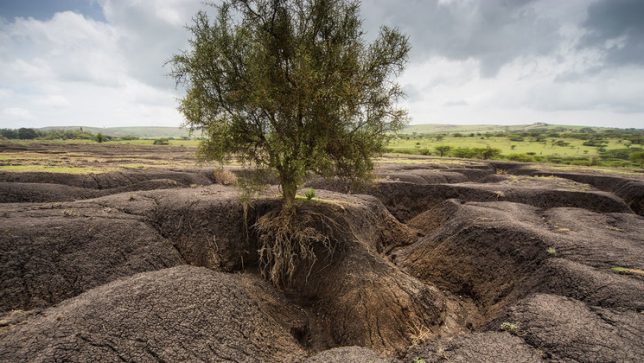 Pierre Sabatier of the University of Savoie Mont Blanc and his colleagues conducted the study following their earlier research examining sediment cores from the bottom of Lake Saint André in France. The researchers analyzed the cores for a range of pesticides used by nearby vineyards and found that starting from the early 1990s, soil erosion rates had almost doubled compared to the previous 2 decades. The increased erosion coincided with the beginning of glyphosate use and was accompanied by a rise in the pesticide DDT, which had been banned 20 years earlier.

Sabatier and his colleagues hypothesized that glyphosate had accelerated soil erosion, thereby releasing DDT stored in the soils. They wanted to see if this phenomenon could be happening elsewhere and decided to look at the French West Indies, where banana growers used chlordecone to control weevils on plantations beginning in 1972. A persistent pollutant linked to neurological and reproductive problems, chlordecone was allowed in Guadeloupe and Martinique until 1993 even though it had been banned in mainland France 3 years prior. Workers on the islands have been seeking compensation from the French government for failing to protect them against chlordecone exposure.

To test their hypothesis, Sabatier’s team collected two cores that contained several decades worth of sediments 2 km off the islands’ coasts. By measuring lead and cesium radionuclides in the sediment, which have half-lives of 22 and 30 years, respectively, the researchers dated the sediment layers along the lengths of the cores. Then they analyzed sediment samples for chlordecone, glyphosate, and their respective degradation products chlordecol and aminomethylphosphonic acid. To confirm that the sediments originated from land, the researchers compared the sediment geochemistry to that of the islands’ soils.

The researchers found that after 1997, when prices of glyphosate plummeted and farmers on the islands started using it in earnest, the rate at which terrestrial soil accumulated in the sediment cores tripled. Chlordecone concentrations also rose after leveling off during the years after the pesticide’s ban, resembling how DDT concentrations changed in the sediment cores from Lake Saint André. “We find exactly the same processes, almost at the same time,” Sabatier says.

These findings do not surprise Artemi Cerdà, a soil scientist at University of Valencia, whose research has also shown that glyphosate use increases soil erosion and compacts soil. The herbicide removes vegetation, leaving soil permanently bare and making it easier for water to carry the soil away, Cerdà explains.

Erosion already hurts farms that need soil, disturbs aquatic ecosystems, and increases flooding risks. With soils that have accumulated toxic pesticides over many years, erosion becomes even more problematic, Cerdà says. “Now they can be released to the ecosystems in one go.”

Although Sabatier thinks the same pesticide release could be occurring in other agricultural areas, data to back this up are lacking. “It is difficult to extrapolate this research over the world, but it’s probably the case because glyphosate is used worldwide,” he says.