One of the leaders of the Afro-Colombian communities in northwestern Colombia, Patrocinio Bonilla a.k.a Patrón, was assassinated on August 11, in a killing that has been linked to his support for agroecology and his struggle against the aerial spraying of glyphosate in the region, which is being pushed by the Trump Administration and the Colombian central government to control Coca crops. 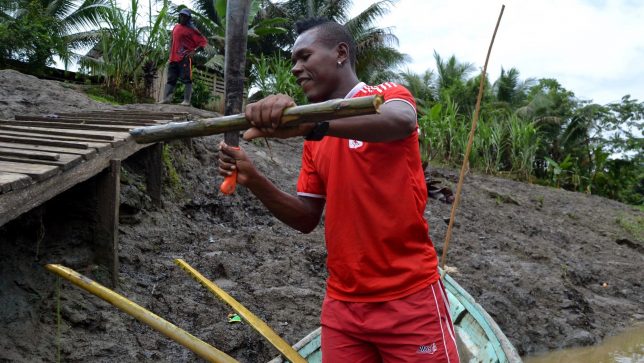 Patrón was one of the founders of ‘Kinchas for Agroecological and Community Production’ in Chocó, northwestern Colombia, where 96% of the people identify as Afro-Colombian or as part of the Emberá Indigenous community.

Kinchas have been leading the fight against aerial spraying of glyphosate in the region, which is set to soon be used again by the Colombian government to control Cocaine production, after a 5 year ban of the practice following a 2015 court ruling.

Patrón was one of the leaders in the region who have found themselves fighting against the growing of Coca by drug traffickers at the same time as fighting against the use of aerial spraying of glyphosate – instead he and his colleagues believed there was a better way to save the flora, fauna and people of the region from the ‘toxic rain’ and the toxic drug trade at the same time, by teaching local communities how to support themselves through agroecology.

Local Colombian media have suggested that Patrón was killed by right-wing paramilitaries in the region who have been supporting the governments’ plans to renew aerial glyphosate spraying by removing dissent through force. Patrón had also been a peace builder in the region through his agroecology and political work and this was allegedly not looked on kindly by the more extreme paramilitaries.

Patrón and his fellow community leaders had labeled the central Colombian government, the paramilitaries and the Trump Administration, as the “Alliance of Death”.

The “Alliance of Death”

CNN reported this week that in 2015, then-president Juan Manuel Santos halted the practice of aerial spraying but his successor President Ivan Duque – prodded by Donald Trump – is now pushing for a hearing before Colombia’s environmental licenses authority, in order to obtain permission to restart the controversial practice.

Sustainable Pulse Fact Check: This CNN source was checked against the White House records of the meeting between Donald Trump and Ivan Duque. The exact quote is below here:

Q: President Trump, what do you think about the efforts of Colombian government to fight against drugs? Do you agree with the aerial spraying with glyphosate?

PRESIDENT TRUMP: Well, you’re going to have to spray. If you don’t spray, you’re not going to get rid of them. So you have to spray, with regard to the drugs in Colombia. Yeah.

Critics of aerial fumigation however, dispute its effectiveness, saying the practice does little to reduce cocaine production and as glyphosate is a ‘probable human carcinogen’ the dangers to local communities are clear.

Aerial fumigations destroy all crops in a targeted area, not just coca plants but also agricultural products such as plantains, maize, yucca that farmers often grow in the same parcels, as the Colombian constitutional court recognized in a 2015 case.

“I can tell you from direct experience, if a farmer doesn’t want to grow coca, and the Army come and spray over his field with produce, I guarantee the first thing the farmer will do is start growing coca, because what else can he do once all his produce is destroyed?” local farmer Jose David Hernandez told CNN.

Toby Muse, a cocaine expert and the author of Kilo: Inside the Deadliest Cocaine Cartels, told CNN that destroying coca crops through aerial fumigations was an ineffective response: “The solution is always going to be working with coca farmers to produce an alternative to growing coca.”

Such programs of crop substitution saw thousands of Colombian farmers swapping coca for coffee, cocoa and other crops following the 2016 peace agreement.