A federal lawsuit filed Wednesday on behalf of the National Black Farmers Association in the Eastern District of Missouri is calling for the removal of Monsanto’s popular weedkiller Roundup from the market, Tri States Public Radio reported Thursday. 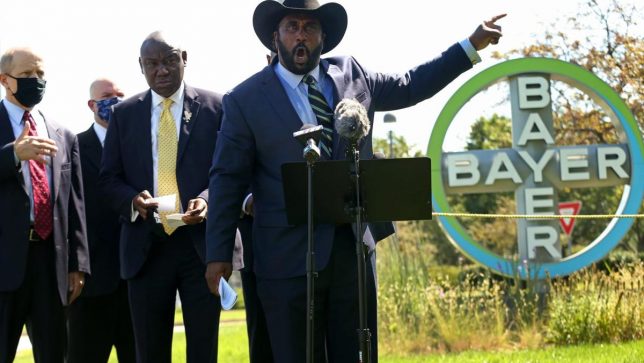 German biotech giant Bayer AG, which bought Monsanto two years ago, said in a statement that the new lawsuit has no basis and that its products are safe.

Virginia-based farmer John Boyd Jr. said during the event that he and other Black farmers were pigeonholed into using the product without proper warning from Monsanto about how to use it and the negative health effects they could incur. In June, Bayer agreed to pay nearly $11 billion to settle about 100,000 lawsuits claiming Roundup caused cancer. More than 25,000 plaintiffs chose not to settle their claims.

Boyd said many more are still at risk of developing health problems as a result of using the product. He’s the president of the National Black Farmers Association, which represents about 109,000 farmers in 42 states, including some farmers in the St. Louis area.

“Every time money is on the table for these settlements, Black farmers have been left out. And that’s why we’re glad to have this legal team represent us so we can get some justice this time. Because we’ve been left out for far too long,” he said.

Civil rights attorney Ben Crump is leading the litigation. He’s also represented the families of Jacob Blake, Breonna Taylor and George Floyd — who were all shot by police this year.

“Black farmers have been trapped into using a dangerous product, and they are paying for it with their economic freedom, their health, and in some cases, their lives,” he said.