Ben & Jerry’s has moved to cut all glyphosate-tainted ingredients from its production chain and introduce an “organic dairy” line next year, after a new survey found widespread traces of the controversial substance in its European ice-creams. 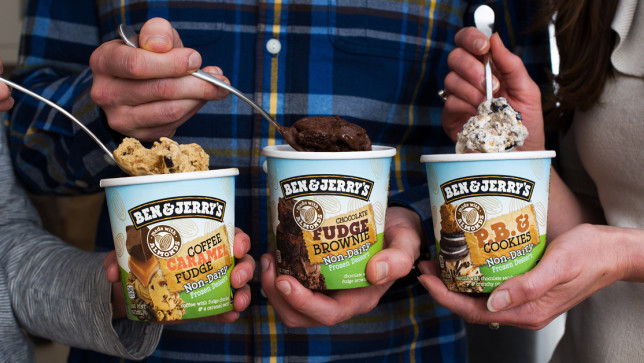 The dramatic initiative follows a new survey by Health Research Institute (HRI) laboratories which found traces of the weedkiller in 13 out of 14 B&J tubs sampled in the UK, France, Germany and the Netherlands.

It will add to a growing unease around the herbicide, which was first marketed in the US by Monsanto in 1974, as RoundUp, but is now the world’s most popular weedkiller, made by companies worldwide. Recently Prosecco DOC announced that wines marketed under the banner would not be able to use glyphosate and the US state of California added it to its list of chemicals that cause cancer.

Similar levels of glyphosate in B&J ice-cream have also been recorded in the US, although scientists told the Guardian these were “very low and not likely to pose a public health problem”.

Laura Peterson, a spokeswoman for B&J, said that the firm was “disappointed, but not totally surprised” to hear the results of the latest analysis.

“Glyphosate is one of the most widely used herbicides in agriculture and is everywhere – from mainstream food, to natural and organic food, and even rainwater – and that’s the issue,” she told the Guardian.

The herbicide is commonly used on crops such as wheat, barley, oats and peanuts, making it likely that it came from B&J’s cookie dough, peanut butter or other added ingredients.

“But simply saying trace levels are in everything is not a strategy,” Peterson added. “By no later than 2020, we will stop sourcing [ingredients] made with crops chemically dried using glyphosate. In addition, we intend to advocate for policies that would end use of glyphosate as a chemical drying agent.”

A new B&J 100% certified organic dairy line will launch next year and is expected to account for 6% of total US sales, she added.

Ben and Jerry’s is known for its environmentally friendly brand image. The Unilever-owned firm has campaigned against Arctic oil drilling and does not use GM crops, which are often manufactured to resist Monsanto’s RoundUp.

Glyphosate has received regulatory approval from several agencies, despite the WHO’s cancer wing deeming it “probably carcinogenic to humans”. Monsanto insist their product is safe to use, and the European Chemical Agency decided“the available scientific evidence did not meet the criteria to classify glyphosate as a carcinogen.”

The trigger for Monday’s move was a survey which found that popular B&J 500ml tubs of flavours such as Peanut Butter Cup, Half Baked and Chocolate Fudge Brownie in the UK all contained between 1 and 1.23 parts per billion of glyphosate.

Ronnie Cummins, the international director of the Organic Consumers Association, which commissioned the new survey, said: “Although we are happy to hear that consumer pressure has forced Unilever/Ben and Jerry’s to declare that some of their non-dairy ingredients will no longer be sprayed with RoundUp … the campaign to force Ben and Jerry’s to begin the transition to 100% organic will continue until the company signs a legally binding agreement and timeline to make this global transition over the next three to five years.”

Michael Antoniou, who heads the gene therapy group at King’s College London which produced the study, said a 35kg child would have to eat 114ml of B&J ice cream daily “over many years” to be at risk.

Products derived from wheat, barley, rye and oats – which can contain glyphosate levels 646 times higher than in the ice-cream – were more troubling, he added.

“Non-alcoholic fatty liver disease affects 20-30% of Europeans,” Antoniou said. “Our results imply that even extremely low daily ingestion of glyphosate-based herbicides may be a hitherto unsuspected risk factor for this disease.”