A wave of glyphosate bans are being introduced by member states in Europe while the issue of the chemical’s reauthorization at EU level drags on. Among the most dramatic developments has been the announcement by Belgium’s federal minister of agriculture, Willy Borsus, that he wants to ban the sale and use of herbicides by non-professionals. He voiced particular concern over glyphosate. 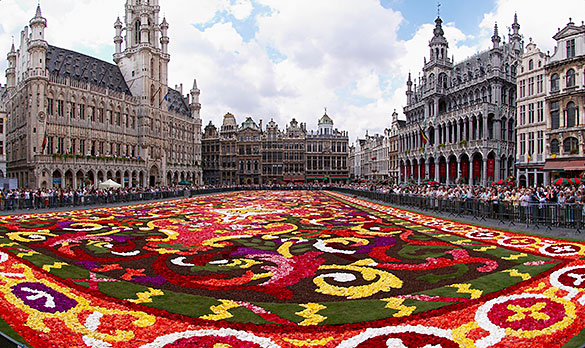 “Considering the risk-benefit balance, there is no justification for the use of herbicides for individuals,” Borsus said. He said there were safer alternatives, such as heat treatment, mechanical weeding, or bio-pesticides.

Borsus also called for a new investigation into alleged “Monsanto manoeuvres and attempts to influence experts” with the aim of keeping glyphosate on the market.

Borsus’s surprise move follows prominent coverage in the European press of the internal Monsanto documents (the so-called Monsanto papers) emerging out of the cancer litigation in the United States.

The documents appear to suggest that Monsanto manipulated the research on glyphosate. Commenting on the revelations, the leading toxicologist Prof Jan Tytgat, president of the European Section of the International Society on Toxinology, commented, “We can no longer rely on the studies on glyphosate submitted by Monsanto to the European agencies. All the more because they are not freely accessible. Those studies should now really be made public.”

Tytgat also called for new studies on the chemical to ascertain once and for all how harmful it is.

The environment ministers of Wallonia, Carlo Di Antonio and Brussels, Céline Fremault, welcomed Borsus’s announcement, saying they were “relieved and satisfied”. Meanwhile the Flemish environment minister, Joke Schauvliege, plans to follow suit and ban glyphosate for non-professional use in Flanders.

Agricultural use will still be permitted in Wallonia but the regional government intends to mandate buffer zones between sprayed fields and neighbouring properties.

In Belgium as a whole the use of any pesticides by public authorities in areas such as parks, school grounds, and playgrounds has been banned since 2015.

France has banned the use of pesticides by the state, local authorities and public bodies for the maintenance of public spaces, forests and roadsides. The sale of pesticides to amateur gardeners will also be banned from January 2019.

France’s environment minister Ségolène Royal has aligned herself with the verdict of the World Health Organisation’s cancer agency IARC, which has classified glyphosate as a probable carcinogen, saying, “We need the Commission to align the most protective position for health, which is the WHO position”. Royal roundly condemned ECHA’s view that it is not a carcinogen, saying that she was “appalled by this opinion, which does not recognize the glyphosate as a carcinogen… in opposition to the advice given by the IARC.”

Italy has banned the use of glyphosate in areas frequented by the public or by “vulnerable groups”, including children and the elderly. The list of banned areas includes parks, gardens and courtyards, the edges of roads and railways, urban areas, sports fields and recreational areas, playgrounds and green areas within the school buildings, and areas adjacent to health facilities. In addition, the pre-harvest use of glyphosate is banned.

In the Netherlands, a ban on the use of any herbicides on hard surfaces has been in place since November 2015.

EU Commission President Juncker has indicated in a letter to MEPs that nothing stands in the way of the Commission proposing the re-approval of glyphosate, since the European Chemicals Agency (ECHA) said there was no need to classify glyphosate as carcinogenic, mutagenic or toxic to reproduction.

In his response to a letter from 30 MEPs, Juncker says that given EFSA’s and ECHA’s “thorough evaluation of all available information, there is no reason to doubt the scientific evaluations and the conclusions on glyphosate made by the European Union”.

The 30 MEPs had asked Juncker, in the wake of the disclosure of the Monsanto Papers, which raise questions about glyphosate’s safety and the research practices of its manufacturer Monsanto, “not to propose any new approval of glyphosate in the EU” so long as
* the Glyphosate Task Force (GTF) studies used for the EFSA and ECHA assessments have not been critically reviewed
* the impact of the Monsanto-funded Kier and Kirkland 2013 review of genotoxicity studies has not been investigated, and
* all the restrictions on its use as adopted in the resolution of the European Parliament in April 2016 have not been put in place.

The 2016 EU Parliament resolution had demanded wide-ranging and severe restrictions on the use of glyphosate herbicides, including
* a ban on use by non-professionals
* a ban on use in public areas such as parks and playgrounds
* a ban on agricultural use where integrated pest management systems are sufficient for weed control
* strict limits on pre-harvest use on crops
* full disclosure of all scientific evidence used for the proposed re-authorisation of glyphosate.

Juncker effectively pretended in his letter that the Commission had already implemented the Parliament’s various demands by virtue of the single action of banning a single co-formulant used in some glyphosate products, POE-tallowamine, or POE for short.

Juncker wrote in his letter, “In the meantime, as asked by the Parliament’s resolution last April, the current approval of glyphosate has been restricted. In July 2016, the Commission, with the support of the Member States, banned a co-formulant called POE from glyphosate-based products, in order to minimize the use in public parks, public playgrounds, and gardens and to minimize the pre-harvest use of glyphosate.”

Juncker’s statement appears disingenuous in light of the fact that the Commission had already decided to ban POE before the Parliament produced its April 2016 resolution – enabling the Parliament to formally welcome “the exclusion of POE-tallowamine from use in plant protection products containing glyphosate” in the resolution.

In his claim that he is banning POE “in order to minimize the use in public parks…”, Juncker is either confused himself or is trying to confuse the public and MEPs. That’s because banning the co-formulant POE from glyphosate products will have no effect on their use in public areas and as pre-harvest desiccants. POE is not confined to those uses and in any case, there are plenty of other co-formulants that are not banned, enabling glyphosate herbicide use to continue unabated in public areas and on crops before harvest, in countries that have not brought in their own bans.

It now seems that the meeting on glyphosate between the Commission heads of cabinet on Tuesday of last week was not a “debate” or even a scientific discussion, but simply a way for the top Commissioners to inform other Commissioners about the state-of-play.

So it was entirely unnecessary for the farm lobby to send a letter to Juncker this week to urge him to re-authorise glyphosate. The response was already prepared.

What is still unknown is how soon the Commission will issue its proposal to re-approve glyphosate. The other question is which governments will oppose the Commission, and try to make it follow the Parliament’s advice on EU-wide restrictions. Effectively, these restrictions will have to be based on environmental grounds, since the European agencies have dismissed all relevant health concerns.