Today the five international judges for the Monsanto Tribunal presented their legal opinion, which include key conclusions, both on the conduct of Monsanto and on the need for important changes to international laws governing multinational corporations. 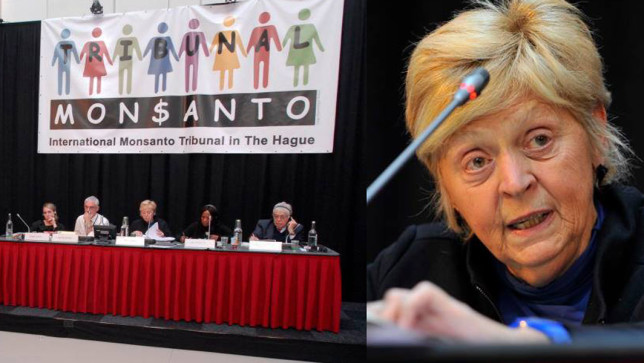 The judges conclude that Monsanto has engaged in practices that have impinged on the basic human right to a healthy environment, the right to food and the right to health. Additionally, Monsanto’s conduct has a negative impact on the right of scientists to freely conduct indispensable research.

The judges also conclude that despite the development of regulations intended to protect the environment, a gap remains between commitments and the reality of environmental protection. International law should now precisely and clearly assert the protection of the environment and establish the crime of ecocide. The Tribunal concludes that if ecocide were formally recognized as a crime in international criminal law, the activities of Monsanto could possibly constitute a crime of ecocide.

In the third part of the advisory opinion, the Tribunal focuses on the widening gap between international human rights law and corporate accountability. It calls for the need to assert the primacy of international human and environmental rights law. A set of legal rules is in place to protect investors’ rights in the frame of the World Trade Organization and in bilateral investment treaties and in clauses in free-trade agreements.

These provisions tend to undermine the capacity of nations to maintain policies, laws and practices protecting human and environmental rights. United Nations bodies urgently need to take action; otherwise key questions of human and environmental rights violations will be resolved by private tribunals operating entirely outside the United Nations framework.

The Tribunal also urges to hold non-state actors responsible within international human rights law. The Tribunal reiterates that multinational enterprises should be recognized as responsible actors and should be subjected to the International Criminal Court jurisdiction in case of infringement of fundamental rights. The Tribunal clearly identifies and denounces a severe disparity between the rights of multinational corporations and their obligations. Therefore, the advisory opinion encourages authoritative bodies to protect the effectiveness of international human rights and environmental law against the conduct of multinational corporations.

The very clear conclusions will be of interest to both the critics of Monsanto and industrial agriculture and to the shareholders of chemical companies and especially Bayer. The reputation of Monsanto—and Bayer in case of a merger—will not exactly improve with these conclusions by the judges of the Tribunal. The advisory opinion is a strong signal to those involved in international law, but also to the victims of toxic chemicals.

The Tribunal has created links and shared important information between lawyers and organisations that represent the victims. Therefore it is likely that the conclusions will lead to more liability cases against Monsanto and similar companies. This will shine a light on the true cost of production and will affect Monsanto (Bayer) shareholder value in the long run. Companies that cause damage to health, food and healthy environment should and will be held accountable for their actions.