As American gather their families to share a Thanksgiving meal this week, new government data offers a potentially unappetizing assessment of the U.S. food supply: Residues of many types of insecticides, fungicides and weed killing chemicals have been found in roughly 85 percent of thousands of foods tested. 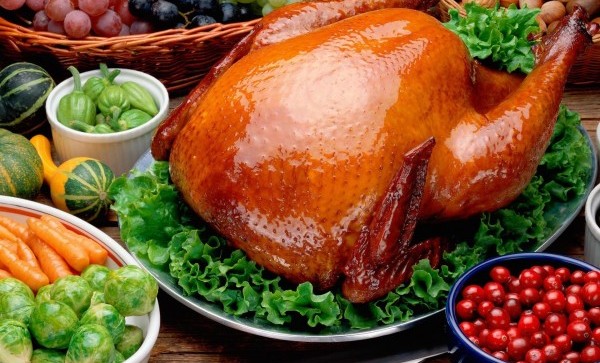 Data released last week by the U.S. Department of Agriculture shows varying levels of pesticide residues in everything from mushrooms to potatoes and grapes to green beans. One sample of strawberries contained residues of 20 pesticides, according to the “Pesticide Data Program” (PDP) report issued this month by the USDA’s Agricultural Marketing Service. The report is the 25th annual such compilation of residue data for the agency, and covered sampling the USDA did in 2015.

Notably, the agency said only 15 percent of the 10,187 samples tested were free from any detectable pesticide residues. That’s a marked difference from 2014, when the USDA found that over 41 percent of samples were “clean” or showed no detectable pesticide residues. Prior years also showed roughly 40-50 percent of samples as free of detectable residues, according to USDA data. The USDA said it is not “statistically valid” to compare one year to others, however, because the mix of food sampled changes each year. Still the data shows that 2015 was similar to the years prior in that fresh and processed fruits and vegetables made up the bulk of the foods tested.

Though it might sound distasteful, the pesticide residues are nothing for people to worry about, according to the USDA. The agency said “residues found in agricultural products sampled are at levels that do not pose risk to consumers’ health and are safe…”

But some scientists say there is little to no data to back up that claim. Regulators do not have sufficient comprehensive research regarding how regular, repeated consumption of residues of multiple types of pesticides impact human health over the long term, and government assurances of safety are simply false, say some scientists.

“We don’t know if you eat an apple that has multiple residues every day what will be the consequences 20 years down the road,” said Chensheng Lu, associate professor of environmental exposure biology at the Harvard School of Public Health. “They want to assure everybody that this is safe but the science is quite inadequate. This is a big issue.”

The USDA said in its latest report that 441 of the samples it found were considered worrisome as “presumptive tolerance violations,” because the residues found either exceeded what is set as safe by the Environmental Protection Agency (EPA) or they were found in foods that are not expected to contain the pesticide residues at all and for which there is no legal tolerance level. Those samples contained residues of 496 different pesticides, the USDA said.

Spinach, strawberries, grapes, green beans, tomatoes, cucumbers and watermelon were among the foods found with illegal pesticide residue levels. Even residues of chemicals long banned in the United States were found, including residues of DDT or its metabolites found in spinach and potatoes. DDT was banned in 1972 because of health and environmental concerns about the insecticide.

Absent from the USDA data was any information on glyphosate residues, even though glyphosate has long been the most widely used herbicide in the world and is commonly sprayed directly on many crops, including corn, soy, wheat, and oats. It is the key ingredient in Monsanto Co.’s branded Roundup herbicide, and was declared a probable human carcinogen last year by a team of international cancer scientists working with the World Health Organization. But Monsanto has said glyphosate residues on food are safe. The company asked the EPA to raise tolerance levels for glyphosate on several foods in 2013 and the EPA did so.

The Food and Drug Administration also annually samples foods for residues of pesticides. New documents obtained from the FDA show illegal levels of two types of insecticides – propargite, used to kill mites, and flonicamid, usually aimed at killing aphids and whiteflies – were recently found in honey. Government documents also show that DEET, a common insect repellant, was recently detected by regulators in honey, and the herbicide acetochlor was found on mushrooms.

FDA scientists also reported illegally high levels of the neonicotinoid thiamethoxam found in rice, according to information from the agency. Syngenta has asked the Environmental Protection Agency to allow for higher residues of thiamethoxam permitted in numerous crops because the company wants it to have expanded use as a leaf spray. That request with EPA is still pending, according to an agency spokeswoman.

The most recent public residue report issued by the FDA shows that violation rates for pesticide residues have been climbing in recent years. Residue violations in domestic food samples totaled 2.8 percent for the year 2013; double the rate seen in 2009. Violations totaled 12.6 percent for imported foods in 2013, up from 4 percent in 2009.

Like the USDA, the FDA has skipped glyphosate in decades of testing for pesticide residues. But the agency did launch a “special assignment” this year to determine what levels of glyphosate might be showing up in a small group of foods. An FDA chemist reported finding glyphosate residues in honey and several oatmeal products, including baby food.

Private testing data released this month also reported the presence of glyphosate residues in Cheerios cereal, Oreo cookies and a variety of other popular packaged foods.

QUESTIONS ON CUMULATIVE IMPACTS
Whether or not consumers should worry about food containing pesticide residues is a matter of ongoing dispute. The trio of federal agencies involved in pesticide residue issues all point to what they refer to as “maximum residue limits” (MRLs), or “tolerances,” as benchmarks for safety. The EPA uses data supplied by the agrichemical industry to help determine where MRLs should be set for each pesticide and each crop the pesticides are expected to be used with.

As long as most of foods sampled show pesticide residues in food below the MRLs, there is no reason to worry, the USDA maintains. “The reporting of residues present at levels below the established tolerance serves to ensure and verify the safety of the Nation’s food supply,” the 2015 residue report states. The agrichemical industry offers even broader assurances, saying there is nothing to fear from consuming residues of the chemicals it sells farmers for use in food production, even if they exceed legal tolerances.

But many scientists say the tolerances are designed to protect the pesticide users more than consumers. Tolerances vary widely depending upon the pesticide and the crop. The tolerance for the insecticide chlorpyrifos on an apple, for instance, is very different than the amount of chlorpyrifos allowed on citrus fruits, or on a banana or in milk, according to government tolerance data.

In the case of chlorpyrifos, the EPA has actually said it wants to revoke all food tolerances because studies have linked the chemical to brain damage in children. Though the agency has long considered residues of chlorpyrifos safe, now the agency says, they may not be.

The “EPA cannot, at this time, determine that aggregate exposure to residues of chlorpyrifos, including all anticipated dietary exposures and all other non-occupational exposures for which there is reliable information, are safe,” the EPA said last year. Dow AgroSciences, which developed chlorpyrifos in the 1960s, is protesting the EPA efforts, arguing chlorpyrifos is a “critical tool” for farmers. In the latest USDA residue report, chlorpyrifos was found in peaches, apples, spinach, strawberries, nectarines and other foods, though not at levels considered to violate tolerances.

The EPA defends its work with tolerances, and says it has been complying with the Food Quality Protection Act that requires the EPA to consider the cumulative effects of residues of substances “that have a common mechanism of toxicity.” The agency says to set a tolerance for a pesticide, it looks at studies submitted by pesticide companies to identify possible harmful effects the chemical could have on humans, the amount of the chemical likely to remain in or on food and other possible exposures to the same chemical.

But critics say that is not good enough – assessments must consider more realistic scenarios that take into account the broader cumulative impacts of many different types of pesticide residues to determine how safe it is to consume the mixtures seen in a daily diet, they say. Given that several pesticides commonly used in food production have been linked to disease, declines in cognitive performance, developmental disorders, and attention-deficit/hyperactivity disorder in children, there is an urgent need for more in-depth analysis of these cumulative impacts, according to many scientists. They point to the National Research Council’s declaration years ago that “dietary intake represents the major source of pesticide exposure for infants and children, and the dietary exposure may account for the increased pesticide-related health risks in children compared with adults.”

“With the ubiquitous exposure to chemical mixtures, assurances of safety based on lists of individual toxicity thresholds can be quite misleading,” said Lorrin Pang, an endocrinologist with the Hawaii Department of Health and a former advisor to the World Health Organization.

Tracey Woodruff, a former EPA senior scientist and policy advisor who specializes in environmental pollutants and child health, said there is a clear need for more research. Woodruff directs the Program on Reproductive Health and the Environment at the University of California San Francisco School of Medicine.

“This is not a trivial matter,” she said. “The whole idea of looking at cumulative exposures is a hot topic with scientists. Evaluating individual tolerances as if they occur in solo is not an accurate reflection of what we know – people are exposed to multiple chemicals at the same time and the current approaches do not scientifically account for that.”

Critics say scrutiny of pesticide safety is likely to only soften given President-elect Donald Trump’s decision to name Myron Ebell to oversee transition efforts at the EPA. Ebell, director of the Center for Energy and Environment at the Competitive Enterprise Institute, is a staunch advocate of pesticides and their safety.

“Pesticide levels rarely, if ever, approach unsafe levels. Even when activists cry wolf because residues exceed federal limits that does not mean the products are not safe,” states the SAFEChemicalPolicy.org website Ebell’s group runs. “In fact, residues can be hundreds of times above regulatory limits and still be safe.”

The mixed messages make it hard for consumers to know what to believe about the safety of pesticide residues in food, said Therese Bonanni, a clinical dietitian at Jersey Shore University Medical Center.

“Although the cumulative effect of consuming these toxins over a lifetime is not yet known, short-term data suggests there is certainly a reason to be cautious,” she said. “The message to consumers becomes very confusing.”