GMO Myths and Truths, the scientific case against genetically modified (GM) crops and foods, is now available as a book in a condensed and updated version. 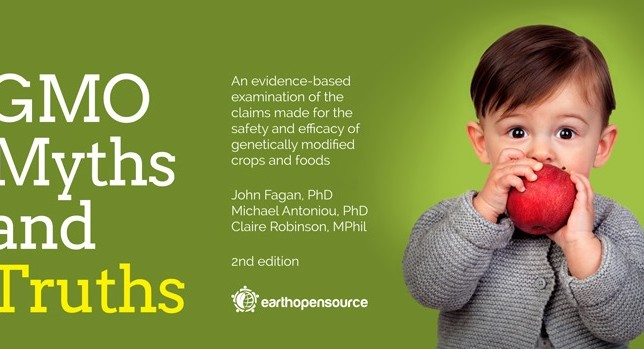 The first edition of GMO Myths and Truths was published in 2012 and the second in 2014 as free online pdf downloads. The 2014 version is still available for free online. Together, these web publications have been downloaded hundreds of thousands of times by people all over the world.

The current third printed edition was produced in response to requests for a shorter publication in book form that could be easily read, carried around, and given to others.

It is available from Amazon, Barnes & Noble, and independent bookstores, at a price of USD 17.95. Requests for larger numbers should be directed to the US distributor, Chelsea Green.

Co-author Claire Robinson said: “Many people find it difficult to read a long and detailed pdf document on their computer, and many people and organizations would prefer to present to policymakers and industry leaders a more concise, professionally produced book. We have been asked time and again for a ‘real’ book – and here it is!”

“GMO Myths and Truths is a very important contribution to the GMO debate. Written in a clear and concise style, it is an invaluable reference for those wanting to learn more about the arguments of proponents and those critical of the technology. I found it of great value in my own efforts to better understand the issue. I hope this information will be widely available to students and to the general public.” – Jane Goodall, PhD, DBE, and UN Messenger of Peace

Co-author Dr John Fagan said: “When someone tells you there is no evidence that GMOs are risky for health and the environment, give them this book. It provides the essential evidence of harm concisely and clearly, and every point is referenced to peer-reviewed scientific research publications or other reports or documents that can be checked by the reader.”