Following a news report confirming that an application for approval for commercialization of GM mustard has been moved with India’s apex regulatory body GEAC (Genetic Engineering Appraisal Committee in the Ministry of Environment, Forests & Climate Change), the Coalition for a GM Free India reminded the government about the serious consequences of this GMO’s release, and warned the government of serious resistance all over the country. 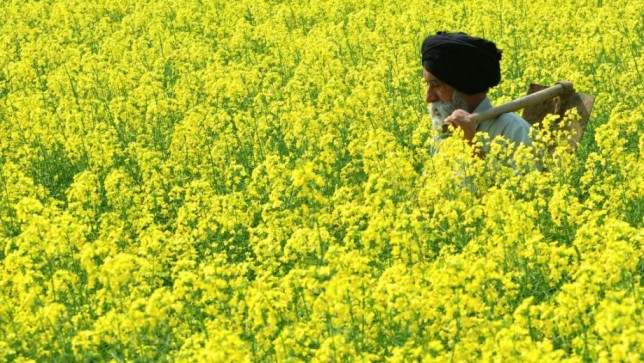 Farmer Unions and citizen groups had earlier started a Sarson Satyagraha urging the government not to jeopardise our food, farming and environment by introducing GM mustard.

This is the first time India would be considering commercial cultivation approval of any GM food crop after an indefinite moratorium was placed on Bt brinjal five years ago in February 2010.

This GM mustard, developed by Delhi University, called Dhara Mustard Hybrid 11 (DMH11) adopted the transgenic technology to facilitate hybridization on claims of increased yields through such a hybrid. In creating such a GM mustard, male sterility has been induced in one of the parental lines, in addition to using herbicide tolerance trait.

Rajesh Krishnan, Convenor of Coalition for a GM-Free India pointed out that this GM mustard hybrid has been created mainly to facilitate the seed production work of seed manufacturers whereas farmers already have a choice of non-GM mustard hybrids in the market, in addition to high yielding mustard varieties.

More importantly, there are non-GM agro-ecological options like System of Mustard Intensification yielding far higher production than the claimed yields of this GM mustard of DU.

Krishnan said, “this GM mustard is also a backdoor entry for various other GM crops in the regulatory pipeline – while herbicide tolerance as a trait has been recommended against by committee after committee in the executive, legislative and judiciary-based inquiry processes in India related to GM crops, this GM mustard uses herbicide tolerance. Contamination is inevitable of all other mustard varieties, while India is the Centre of Diversity for mustard. This is clearly one more GMO that is unwanted and unneeded and is being thrust on citizens in violation of our right to choices, as farmers and consumers”. He also added that most state governments were not even willing to take up field trials of this GM mustard and only Punjab and Delhi had allowed the same.

“GEAC is functioning in a highly secretive fashion, and while the nation does not know what is happening inside the regulatory institutions with applications like this GM mustard, biosafety data is being repeatedly declined by the regulators. What are the regulators hiding and whose interests are they protecting? Why should the regulators be trusted for their safety assessment when in the case of both Bt cotton and Bt brinjal, the Supreme Court Technical Expert Committee (SC TEC) which took up a sample biosafety analyses in 2013 showed that the regulators were wrong in concluding the safety of these GMOs? The Supreme Court in 2008 had ordered that biosafety data be placed in public domain when petitioners in the GM PIL argued that unless the toxicity and allergenicity data are made known to the public, the applicants and concerned scientists in the country would not be in a position to make effective representations to the concerned authorities. On 26/6/2009, the CIC passed Orders in the case of RCGM (another regulatory body) withholding biosafety information and directed that the regulator should comply with the CIC decision on 22/11/2007 for providing existing data with regard to other agricultural products, before any massive farm trial. While these orders exist, my RTI application for biosafety data has been declined with regard to this GM mustard. We would also like to remind the government that in the case of Bt brinjal, the regulators sought public feedback and the Government of India took up public consultations before taking a final decision on Bt brinjal’s commercial cultivation fate in india. However, this current Government seems to be keen to conduct regulatory processes in a secretive fashion. Our past requests to meet with the Environment Minister to share our concerns met with no success. As the government gets more secretive and opaque around regulation, the public has a right to know what are they afraid of, if everything is safe and scientific?”, said Kavitha Kuruganti, Convenor of Alliance for Sustainable & Holistic Agriculture (ASHA) who has been seeking biosafety data under RTI Act without any success.

It is also pertinent to remember that GEAC continues to exhibit objectionable conflict of interest in its constitution and five years after the Bt brinjal moratorium decision in the country, nothing has improved as far as citizens’ interests are concerned, she said.

The Coalition for a GM Free India demands that the Union Minister for Environment, Forests and Climate Change, Prakash Javadekar, under whose Ministry comes GEAC, to: