Civil society groups from South Africa, Latin America- especially Brazil, Argentina- and the United States are deeply disturbed by the recent decision by the South African GMO authorities to grant approval for the import into South Africa, of Dow’s genetically engineered (GE) soybean variety (DAS-44406-6). This variety is genetically engineered to resist liberal applications of the toxic chemicals 2,4-D, glufosinate and glyphosate. Such an approval is calculated to add weight to Dow’s applications for approvals of this GE variety for commercial growing especially in Brazil, Argentina, and the US. 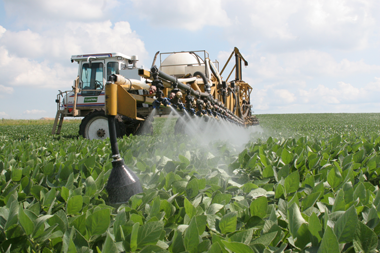 “We condemn the decision by the South African authorities. Once again, economic interests are riding roughshod over our government’s stewardship role to protect the health of our citizens and environment. The decision to approve this GE soybean variety is all the more galling in light of a current motion by the African Christian Democratic Party before the South African Parliament, to overturn a previous decision to allow imports of Dow’s 2,4-D tolerant GE maize into South Africa.” said Mariam Mayet of the African Centre for Biosafety. This GM maize has been dubbed “agent orange” maize by the media, owing to the use of 2,4 D as an ingredient in the infamous chemical, Agent Orange used in the Vietnam War to devastating effects.

According to the groups, this approval sets a dangerous precedent, and also makes a mockery of claims by the biotech industry that GE crops result in lower pesticide use. GE herbicide resistant (HR) soybeans currently account for nearly 50% of the global area planted with GE crops. “The introduction of GE herbicide resistant soybeans in the United States, Argentina and Brazil has resulted in a massive increase in pesticide use, predominantly glyphosate,” explained Carlos Vicente from the international organisation GRAIN. In the United States, HR soya cultivation resulted in an additional 167 million kg of glyphosate use between 1996 and 2011.iBetween 1996 and 2011 the amount of glyphosate used in Argentina increased 11 fold, to 237 million litres. The volume of pesticides sold in Brazil increased by 360% between 2000 and 2009.ii

A similarly dramatic surge in pesticide use is expected in the Americas, but with even more severe impacts on rural communities’ health. Independent analysis from the United States has projected that widespread planting of 2,4-D corn—if approved—could trigger as much as a 25-fold increase in that country’s use of 2,4-D on corn, from 2 million kgs at present to over 45 million kgs annually by 2019.iii

“Any increase in the use of 2,4-D in association with Dow’s 2,4-D resistant corn will hit rural communities especially hard, as numerous medical studies have linked 2,4-D and related herbicides to increased rates of cancer and Parkinson’s disease as well as low sperm counts in farmers, and to birth anomalies in their children,” said Dr. Marcia Ishii-Eiteman, Senior Scientist with Pesticide Action Network North America. “Farmworkers and other rural residents will also be at risk. 2,4-D has been shown to cause liver and nerve damage, as well as hormonal disruption and is classified by the World Health Organisation as possibly carcinogenic,” she added.

2,4-D is banned completely in Norway, Sweden and Denmark. In Canada several provinces have restricted 2,4-D’s use. Glufosinate has been found to negatively affect the cardiovascular, nervous and reproductive systems in rodents and mammals.

Carlos Vicente from GRAIN in Argentina added that “the severe risks to human and animal health and the environment posed by glyphosate are well documented. A human tragedy is unfolding in Argentina due to the introduction of glyphosate tolerant soya there. Peasant farmers have been forced off their lands into large urban slums, and those left behind have experienced dramatic increases in cancers, spontaneous abortions and birth defects.”

“The biotech industry promised a reduction in pesticide use, but their products have simply led to increased reliance on older and more toxic pesticides to control the “superweeds” created by the use of RoundUp Ready GM seeds in the first place,” noted Gabriel Fernandes of the Brazilian organisation, AS-PTA. “The reality is that herbicide-resistant seeds are the growth engine of the pesticide industry’s sales and marketing strategy. These seeds are part of a technology package explicitly designed to facilitate increased use of and dependence on the companies’ own proprietary herbicides.”

Critics add that 2,4-D is a volatile herbicide prone to drift beyond the field of application to damage neighboring crops and wild plants, with potentially devastating consequences for biodiversity. The U.S. Environmental Protection Agency (EPA) and the National Marine Fisheries Service found that 2,4-D is likely already having adverse impacts on several endangered species in that country, including the California red-legged frog, the Alameda whipsnake, and Pacific salmon, via impacts on their habitats and prey.iv

Such is the urgency of the situation that civil society groups from three regions have felt compelled to approach the United Nations High commissioner on Human Rights and the Secretariat to the UN Convention on Biodiversity for urgent intervention.