Calling the Parliamentary Standing Committee on Agriculture’s report on GM crops a historic, comprehensive and well-grounded document, the Coalition for a GM-Free India welcomed the report and hoped that the governments in India, especially the Union Government, would change their perspective on the subject at least now. It is clear that the government’s views are uninformed and biased on the matter, and the blind promotion of the technology is unscientific to say the least, said the Coalition. It is symbolic that the Standing Committee’s report comes out on August 9th, observed as “Quit India” day in the country – it is time that GM crops are thrown out of our food and farming systems, a Press Release said. The Coalition asked for the immediate implementation of one of the key recommendations of the Committee, which is to stop all field trials of GM crops. 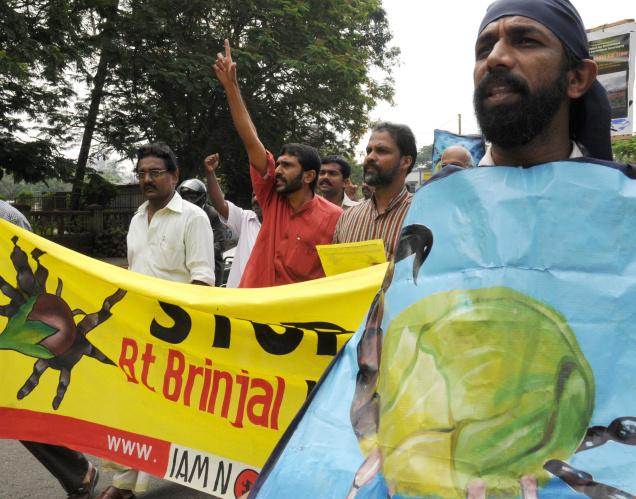 “This report vindicates the concerns and positions taken by many State Governments in India, such as Bihar, Kerala, Madhya Pradesh, Chattisgarh etc which have disallowed GM crops, including field trials. It also vindicates the larger public demand not to allow GM crops into our food and farming systems” said Sridhar Radhakrishnan, Convener of the Coalition.

It is evident that the Chair and members of the Standing Committee have gone into the finer details of this controversial technology and studied it from all angles, including the socio-economic, so that the interests of the Indian farmer are upheld ultimately. The report looks at regulation and its shortcomings and questions the Ministry of Agriculture on its policy-making related to transgenics in Indian agriculture. The Coalition sincerely hoped that the nation as a whole takes pointers from this analysis and requests law makers and the government to throw out the deeply flawed Biotechnology Regulatory Authority of India (BRAI) Bill and start at the drawing board afresh, with the correct mandate and therefore, the correct ministries.

“We also agree with the Standing Committee recommendation that the current “collusions of the worst kind” in the regulatory system be probed thoroughly”, added Sridhar Radhakrishnan.

The Agriculture Standing Committee has 31 members and is headed by veteran parliamentarian Basudeb Acharia. Interestingly enough, this report was unanimously adopted by the Committee, cutting across party lines.

Kavitha Kuruganti, Member of the Coalition added that the report comes at the right time, when the biotech industry with its deep pockets is exerting pressure in overt and subtle ways on governments. “Ignoring the ground reality of the plight of rainfed smallholder farmers in the country, the biotech industry is busy profiteering at their expense. The analysis of the Standing Committee when it comes to Bt cotton performance in the country, backed up by field visits by committee members, is that it has aggravated agrarian distress rather than helped farmers. We demand that liability for this be fixed on promoters and regulators. The irresponsible hype and promotion of this technology has cost many farmers their lives and this cannot continue”, she said.

The Coalition noted that it is only a public debate facilitated by the then Union Minister for Environment & Forests, Jairam Ramesh, that stopped another disaster in the form of Bt brinjal descending upon our farmers and citizens who would have been forced to consume it. The Standing Committee report takes cognizance of this too.  Keeping in view the risks involved in open-air field trials of GMOs the committee has recommended that all field trials be stopped immediately; we wholeheartedly welcome the recommendation of the Committee. It is time that Punjab, Haryana, Andhra Pradesh and Gujarat, which have given permissions for such trials stop the open air release of GMOs in their states”, the Coalition stated.

The Coalition hopes that the report will form the basis for a deep and widespread debate on the subject of GMOs in our food and farming in the country and said that India should be proud of this historic, well-analysed report coming out in the year that the country is hosting the Convention on Biological Diversity’s COP-MOP in Hyderabad later this year. “We hope that this report will guide the thinking in other countries as well, including our neighbouring countries with similar socio-economic conditions for their farming communities”, said the Coalition.