In a fair world, Aruna Rodrigues would be heralded as an incredible individual for her ongoing struggle to protect the socio-economic and environmental integrity of India. So says respected environmentalist, author and campaigner Leo Saldanha, GMWatch reported. 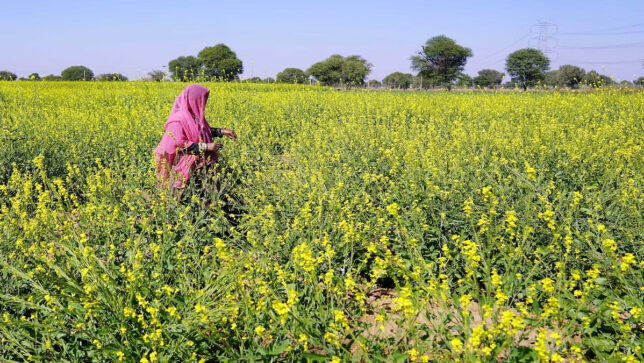 He adds: “Since 2005, she has tirelessly pursued a public interest litigation before the Supreme Court of India, in which she has made a case why India should not yield to pressures from mega agri-transnational corporations and certain sections of the Indian agricultural sector who are keen on promoting genetically modified organisms in farming.”

India’s apex regulatory body, the Genetic Engineering Appraisal Committee, recently sanctioned genetically modified (GM) mustard for cultivation. This would be India’s first GM food crop, despite a public interest litigation (PIL) before the Supreme Court to prevent cultivation as well as the widespread rejection of GM mustard by farmers’ organisations.

Aruna Rodrigues, the lead petitioner of the PIL, has exposed in her various submissions to court that claims about yield increases through GM mustard to be completely baseless. She indicates how data has been rigged and manipulated and protocols have been severely compromised, and that the government and its regulators are parroting the false claims of the crop developers.

Thanks to the PIL, the Supreme Court put a stay on the commercial release of GM Mustard on 3 November 2022.

Independent experts who have looked at the biosafety data submitted by the crop developer at Delhi University have clearly pointed out that GM mustard has not been tested rigorously and adequately.

India is a centre for diversity for mustard and several high-level official committees have recommended against transgenic technologies in crops for which the country is the centre of origin or centre of diversity.

Various high-level reports have also advised against introducing GM food crops to India per se. These reports conclude that GM crops are unsuitable for India and that biosafety and regulatory procedures are wholly inadequate.

Rodrigues also played a leading role in preventing commercial cultivation of GM brinjal more than a decade ago. Her tireless efforts have been a thorn in the side of global agritech corporations and seriously compromised regulatory officials who have for the best part of two decades been trying to get GM food crops cultivated in India.

There is much at stake.

India has a lot to lose, not least its food and seed sovereignty and contamination of its crops as well as the risks genetically modified organisms (GMOs) pose to human health.

The industry has much to gain.

Global biotech corporations like Bayer and Corteva are seeking to increase their control over the future of food and farming by extensively patenting plants and developing a new generation of GMOs.

They seek to claim all plants with those genetic traits as their ‘invention’.  Such patents on plants would restrict farmers’ access to seeds and impede breeders from developing new plants as both would have to ask for consent and pay fees to the biotech companies.

According to an October 2022 report, the global GM crop and seed market is projected to reach $46 billion by 2027. That is up from an estimated US$30.6 billion in 2020. The US market is estimated at $8.4 billion, while China is forecast to reach a projected market size of US$10 billion by the year 2027.

If India succumbs to pressure, that figure of $46 billion by 2027 could be much larger. With 1.4 billion people, India represents a massive financially lucrative cash cow.

For instance, Goldstein Research pushes pro-GM industry talking points and laments about resistance to GM food seeds as it is hindering the growth of India’s GM seed market. Even so, it forecasts that the Indian GM seed market is set to reach US$13.1 billion by 2025 (cotton is the only legally sanctioned GM crop in India at this time).

GM mustard is regarded as a pioneering food crop in India – it would open the floodgates for many other GM food crops that are in the pipeline under a veil of secrecy, including wheat, rice, brinjal and chickpea.

But – it seems – genuine science stands in the way. GM mustard is unwanted, unneeded and fails to stand up to scientific rigour.

Maybe that is why, in December 2022, the Indian Council for Agricultural Research (ICAR) prevented serving and former public officials from expressing any opinion or writing any article on the approval to release GM mustard. This is a ‘gag order’ and an attempt to close down debate on the matter and to keep the public in the dark on the issue.

Trade and agriculture policy specialist Devinder Sharma says that silencing scientific voices indicates there is more to hide than reveal. He says that every claim that the ICAR makes about GM mustard can be challenged. And it has been – in court. Sharma adds that the US is placing tremendous pressure on India to embrace GM crops.

In finishing, let us turn to where this article began – with Aruna Rodrigues.

Leo Saldanha, who is mentioned at the start of this article, is forthright on the Change.org website in condemning a recent attack on Rodrigues.

Due to Rodrigues, Saldanha says, the Supreme Court has time and again questioned the enthusiasm with which the Indian government and several public institutions have collaborated, questionably and controversially, in promoting GM foods and crops.

Just before Christmas, however, Aruna Rodrigues was unexpectedly forcibly evicted from her ancestral home by the Indian army. The Defence Estate Office is the custodian of all military properties of India and is required to secure such properties by following the due process of law.

Saldanha notes that Rodrigues’ home has been with her family from 1892 – legally secured via proper sale deeds. But about 27 years ago, the Defence Estate Office made a claim on the house. This claim was challenged, and the matter has been in court since then. Consequently, any action against the occupant should be only through due process of law.

On 20 December 2022, a court ruled that Aruna Rodrigues has occupation rights to the house. Yet the Defence Estate Officer moved into the house with army personnel – without any court directive – and physically removed her and threw the contents of the house onto the street. Within hours, a court ruled in Rodrigues favour. By then, however, the damage had been done.

As Saldanha says, we can only wonder whether any of this is connected to Rodrigues’ case before the Supreme Court. Given the billions of dollars at stake for the global agritech companies, it would indeed be wise to wonder.

Colin Todhunter is a research associate of the Centre for Research on Globalization with an interest in food, agriculture and development issues.