A large group of Chinese experts and citizens have joined together to sign a protest letter against ChemChina’s acquisition of the Swiss pesticide giant Syngenta. 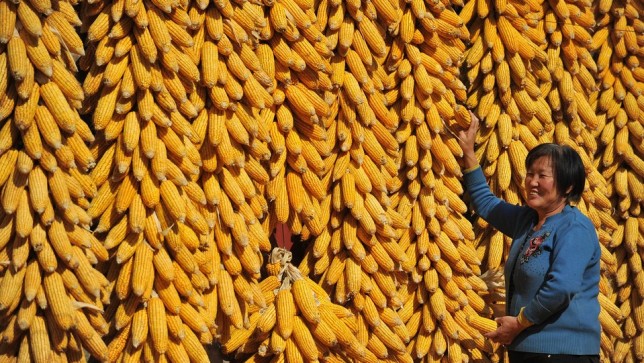 The protest letter is based on the serious health concerns many Chinese citizens have over GMO crops and pesticides. The letter can be found in full below and was even signed by China’s former Chemical Industry Minister Qin Zhongda:

Syngenta, previously headquartered in Switzerland, is the third largest GM seed company of the world and is notorious in the introduction of the first generation GM crops. Syngenta is active in developing the next generation of GM crops, such as GM soybeans SYHT0H2, RR2 Yield-SCN, GM maize Agrisure VipteraG（MIR162）and Golden Rice. They might cause even greater risks, and will cause widespread and uncontrollable contamination to Chinese staple crops, and cause serious harm to the health of Chinese consumers, to food safety and to the livelihood of Chinese farmers.

Syngenta is also the developer and main producer of Atrazine (called You Qu Jin in China), Paraquat (Gramoxone), Dicamba and other high-risk pesticides.

The herbicide Atrazine (You Qu Jin) is an Endocrine Disruptor. It can harm the reproduction system, increase risk of cancer, and cause great harm to human health and the ecological system. It thus was banned by the EU in 2005. Deceived and misled by Syngenta’s propaganda for years, China at present has over 600 herbicide products containing You Qu Jin (Atrazine) “pesticide registered” in China, widespread without control!

Paraquat is another highly dangerous pesticide sold worldwide by Syngenta under name Gramoxone; Because of its cumulative harm, including eye injury, skin calcination and stimulation, even death, etc., 36 countries have already banned Paraquat.

On April 24, 2012, A No.1745 Announcement was jointly announced by the Ministry of Agriculture, Ministry of Industry & Information, General Administration of Quality Supervision, Inspection and Quarantine of China: “Stop approving newly added Paraquat production, formulation facilities”. Davor Pisk, chief operation officer of Syngenta expressed their opinion on the China’s Paraquat banning statement: “We do not consider that the policy of the Chinese government is appropriate”, and resisted in action: The Syngenta Nantong wholly-owned company in 2015 expanded their “4000 tons/year Paraquat production” to “10,000 tons/year Paraquat production”!

Syngenta in fact has descended into a “Banished”: The Swiss Federal Council on Dec. 18, 2015 decided to extend the ban on GM crops to 2012! EU and Switzerland in Oct. 2003 decided to stop using Atrazine herbicide, a main product of Syngenta! In May 2013, the EU announced a ban on three new neonicotinoid insecticides containing Thiamethoxam amine, imidacloprid, thiamethoxam oxazine (for comparison, many pesticides and seed coatings that Syngenta promotes in China contain thiamethoxam oxazine)! As Syngenta can’t maintain operations in Europe, it moved to the USA.

Syngenta is also one of the most vicious transnational corporations like Monsanto, with rogue corporate culture: it uses rogue means to persecute Prof. Tyrone Hayes hired by Syngenta to evaluate the safety of Atrazine; it persecutes the German farmer who revealed the harm that Syngenta’s GM maize Bt176 has caused to the health of his cows.

Almost all European countries and some other developed nations, as well as many developing countries, are driving GM seed companies out of their markets and establishing laws to tightly restrict or ban cultivation of GM crops. Even the USA is quietly moving away from GM agriculture. Facing growing resistance by people around the world, corporations such as Monsanto, Syngenta, Dupont and other GM/agrochemical companies try desperately to reverse their decline and recover their massive investment falling into the garbage bin.

Under such a situation, Syngenta colludes with Monsanto, and the Blackwater, JP Morgan Chase, manipulator behind the screen, together with traitors in China, creates this transnational merge and acquisitions behind multiple layers of black curtains, with Monsanto’s false bidding (in fact helping Syngenta to increase their price) and JP Morgan Chase claimed U.S. dollars 50 billion “financing”, intend to sell this worthless Syngenta at a skyrocketing price of 43 billion to ChinaChem. However, this does not only involve money.

ChinaChem is exclusive distributor of Monsanto’s Roundup — a glyphosate herbicide, classified by WHO IARC as “probable carcinogen to humans” — in China (including Taiwan), India, Pakistan, Vietnam, Philippine, Thailand, Bangladesh, Australia and New Zealand. ChinaChem has direct legal responsibility for poisoning humans and the environment in these regions!

ChinaChem’s merge – acquisition of Syngenta, predictably, will sink China’s agriculture deeper into the GM-agrochem garbage trap! It will forever nourish Monsanto and Syngenta with the Chinese people’s hard-earned money and enable Monsanto and Syngenta to continually poison all of mankind with these huge GM tumors!

The practice of the past 20 years has proved GM agriculture bound together with agrochemicals has brought innumerable harm to human health and ecological safety. ChinaChem’s acquisition of Syngenta, the wide-spread promotion of GM — agrochemical agriculture and sales of GM food will completely destroy China’s agriculture and food security, and thoroughly destroy our nation and people!

Therefore, the Chinese people and people worldwide are strongly opposed to this transnational acquisition! ChinaChem must immediately stop this suicidal acquisition that will cause a genociding disaster to the Chinese nation!

Clause 36 stipulates: “nobody is allowed to …… damage citizens’ physical health”;

According to the spirit stipulated by the constitution, the State Council State-owned Assets Supervision & Administration Commission (Commision) and each of its officials, when they examine ChinaChem’s U.S. Dollar 43 billion acquisition – merging with Syngenta, it must assure that this acquisition — the most massive value acquisition on China’s state-owned history — “Protects the safety of the motherland”, places “protect people’s health” at priority position, and absolutely does not make decisions forming the constitution of crimes that “endanger the safety of the motherland”, “damage citizen’s physical health” which will surely cause all the people of the Chinese to vehemently oppose!

In order to help the Commission make the correct decision, we put forward the following requests:

(1) The ChinaChem Group in 2006 became the exclusive distributor of glyphosate herbicide Roundup and other Monsanto agrochemicals, has unshirkable responsibility to all the harm caused by extending Roundup’s Pesticide Registration in China to 2018. We therefore request the Commission to instruct China chemical group to release all the toxicology animal test reports, i.e. the basis for extending the Pesticide Registration of glyphosate herbicide, enabling us to recognize the truth of how Monsanto deceived the Chinese government and Chinese people!

(3) Request the Commission to organize an open, transparent and fair hearing on the case of which ChinaChem intends to acquire – merge Syngenta at U.S. Dollars 43 billion (about RMB300 billion), invite people’s congress representatives, committee members of CPPCC (Chinese People’s Political Consultative Conference), representatives of the democratic parties and consumers, question the ChinaChem Group Board of Directors and the Commission on the case of ChinaChem’s acquisition – merge with Syngenta and criminal evidence how Syngenta deceived the Chinese government and Chinese people!

(4) We herewith strongly request the officials of the Commission, to resolutely put a stop to the disastrous evil multinational acquisition! If we can’t stop this disastrous evil multinational acquisition – merge today, the whole Chinese nation and even global mankind will be disastrously harmed! The Chinese people and global mankind should not be sacrificed for Syngenta!

(5) If the Commission refuses our above four requests, we request a provision of a detailed explanation in response to us.