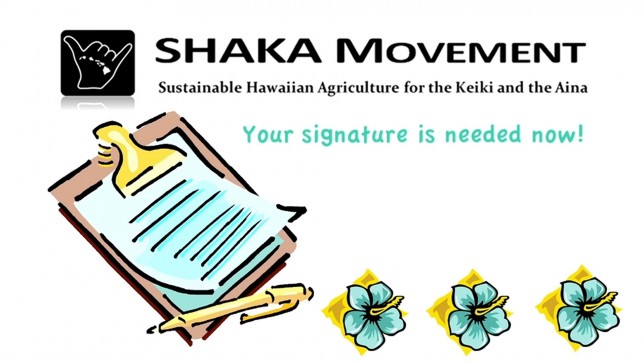 The SHAKA Movement is an advocacy, communications and educational outreach program and hub, where people and organizations come together to work in unison to affect a positive change for the environment and for the people of the Hawaiian Islands.

Their immediate goal is to establish a complete moratorium on the cultivation, growing and testing of all GMO crops, seed crops and test crops in the County of Maui until such practices are proven safe.

Mark himself is an educator and health advocate. He also manages an organic farm in Haiku.

What started your personal interest in GMOs and pesticides?

I got interested in the GMO/pesticide issue for several reasons:

a) I’m a health enthusiast. It’s obvious chemicals can’t be assimilated into our bodies without causing consequences. Robert Louis Stevenson, who spent time in Hawaii 150 years ago, once said that “sooner or later we sit down to a banquet of consequences.” I can see clearly that people who eat organic foods are healthier compared to people on the standard American diet (SAD).

b) Not only have many friends passed over, but the number of cases of cancer is alarming; not just old folks but young people. More than cancers, there are allergies, asthma, learning disorders, autism (at a 1800 times greater rate than when I was born!), neurological problems, etc.  Monsanto’s job is to produce seeds for export and make profits; they are not in the environmental or health fields, so they have no interest in connecting the dots. Nor, for that matter, does the Hawaii Dept. of Health or the Dept. of Agriculture which show little interest and less aptitude.

SO, I am alarmed and incensed that no one is protecting the public health or the public lands, streams, aquifers, reefs and ocean. And so are thousands more of our citizens.

Why is Hawaii of such importance to the Biotech industry?

Hawaii has multiple growing seasons, at least three and in some dry, low-wind areas, four crops can be cycled through. We also believe that Hawaii’s remoteness is attractive; if experiments get out of control, they’re isolated to a few islands. That makes us Biotech guinea pigs.

The SHAKA Movement has recently been involved in the successful collection of over 8500 signatures of registered Maui County voters – what is the reason for this?

In the past month the SHAKA Movement has garnered over 11,000 signatures. On April 7th, we submitted the required number of signatures to the county registrar of voters. His office has 45 days to vet the 8500 signatures. We can continue to collect more and will. The reason why so many people have signed is that many people share my concerns regarding their personal health, the health of their families and friends and the health of the environment (aina is the Hawaiian word for the vitality of the land).

Is the GMO Free movement in Hawaii not just a pro-Organic movement, which is only of importance to a small part of the population, namely organic producers and organic consumers?

The pro-organic movement in Hawaii and on Maui is strong and growing. While we have their support, the Hawaii Farmers Union United (HFUU) is focused on and doing a great job working to expand organic farming. While the organic farmers understand the risk of contamination, for the most part they are busy planting, harvesting and selling their crops.

But the SHAKA Movement is separate from the organic work, it is much broader as it involves a wide range of folks from mom’s dealing with kids’ health issues, school teachers, environmentally aware activists, Hawaiian leaders, people of every ethnic group and cultural background. There are some 44,000 registered voters; when a quarter of them step forward to sign a petition, you KNOW that chemical toxicity is a very hot issue.

What is the current situation regarding GMO labeling in Hawaii?

GMO labeling keeps coming up in the state legislature but the legislators are far behind the public on this issue. And the Biotech industry have invested their campaign cash wisely, so there are still key committee Chairs on Senate and House committees able to prevent labeling bills from coming to a vote.

For the SHAKA Movement, labeling is a token first step.  It’s important so that people who go to supermarkets know the crap they’re buying.  But here in the petri dish of poisons, we want the biotech companies to prove to us that their experiments are not harming us.

Is the SHAKA Movement only concentrating on GMOs or has it got other targets?

SHAKA is fully engaged in this issue for now. At our rally on April 7 citizens from the Voter Owned Elections were on hand to support our efforts and to try to move the legislators holding back a bill that would permit publicly funded elections. Getting the money out of the campaigns is the change that will make other changes possible. But for now, SHAKA has a single focus on educating the public about why we need a moratorium regarding GMOs and the massive amount of pesticides used in their production.

The GMO battle in Hawaii has been given worldwide attention but is there really any chance of removing the Biotech giants, such as Monsanto, from the islands?

Think of the chemicals in the soil and the living organisms being released into our fields and forests like cancer in your body and thick smoke in your lungs. Do we have a choice?  Only if we want to live. See Deuteronomy 30:19: “This day I call the heavens and the earth as witnesses against you that I have set before you life and death, blessings and curses. Now choose life, so that you and your children may live”.

Yes, in the long run we will prevail. It may take a while, but as people learn more they are horrified at the risks we are being subjected to without our consent.